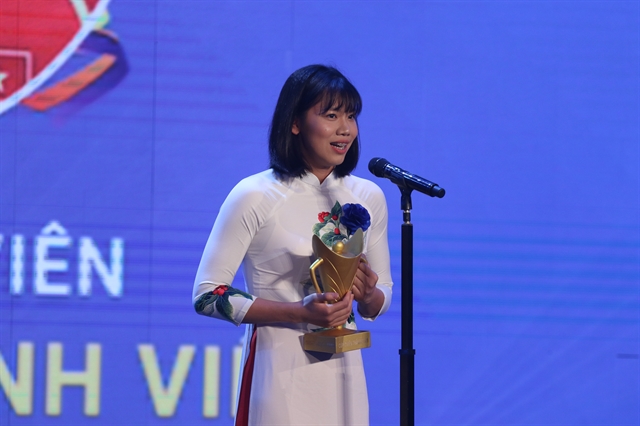 Nguyễn Thị Ánh Viên takes her Victory Cup trophy for the Best Female Athlete of the Year. It is the third time the swimmer honoured in this event. — Photo courtesy of organisers

It was swimmer Viên’s third victory. The 23-year-old shone at December’s SEA Games with six gold medals, and she was honoured as one of the two best athletes at the regional sporting event.

“It is great to take this prize again. My success is not just down to me; it’s also other people, managers, coaches, family and friends, who together with me suffered ups and downs throughout the year,” said Viên, who also won in 2015 and 2016.

Hoàng, 19, finished the year on a high. He took two SEA Games golds and two records. He also qualified for the Olympics in the men’s 800m and 1,500m events.

Young Athlete of the Year went to swimmer Trần Hưng Nguyên, 16. Nguyên, who has competed professionally for two years, took two titles and set one record in the Manila Games.

“I’ve seen Nguyễn Thị Ánh Viên and Nguyễn Huy Hoàng winning this statue in the past and wanted to have a chance like them. That dream has come true today. It is great. Thank you all for supporting and helping me,” said Nguyên.

The success of the athletes means coaches are often overlooked, but not yesterday.

Trần Văn Sỹ took the limelight for winning five golds among the 16  Việt Nam won at the SEA Games. His athletes also won five silvers and one bronze.

“This achievement shows my efforts throughout the year with the support of many people and organisations. Thank you and I promise to guide my teams to even better results,” he said.

Football coach Park Hang-seo overcame two other candidates to win Best Foreign Coach of the Year. It was his second time in a row winning the prestigious award.

Park is currently in Thailand with the U23 team competing at the Asian Championships.  In 2019, he guided Việt Nam to the quarter-finals of the Asian Cup, top place in the ongoing 2022 World Cup qualification’s Group G, and a first SEA Games gold medal.

From Bangkok he contributed his prize to the Tấm Lòng Việt Foundation to support children with heart diseases.

The South Korean promised to do his best for the development of football in Việt Nam.

At the ceremony, organisers also honoured javelin thrower Cao Ngọc Hùng as the Best Disabled Athlete of the Year.

Hùng finished fourth at the World Para Athletics Championships in the UAE in November. The result was enough to earn him a slot at the Tokyo Paralympics this year.

He also took a gold in javelin, a silver in discus and a bronze in the shot put at the Para Grand Prix in China in May.

“It is a happy 2019 for me. I’ve got my dream Paralympics berth and I’ve won this statue. It will be a strong push for me in Tokyo as well as the ParaGames in Manila in March,” said Hùng.

“Việt Nam’s success instilled in the whole nation. It marked a turning point for the country, athletes and coaches. It encouraged them to strive harder in the coming tournaments.”

The Victory Cup is a worthy prize to recognise their contributions. It will be motivation for them to reach further and they deserve to receive this honour,” he said. — VNS

Swimmers Viên, Hoàng are best athletes of 2019 have 811 words, post on vietnamnews.vn at January 16, 2020. This is cached page on VietNam Breaking News. If you want remove this page, please contact us.