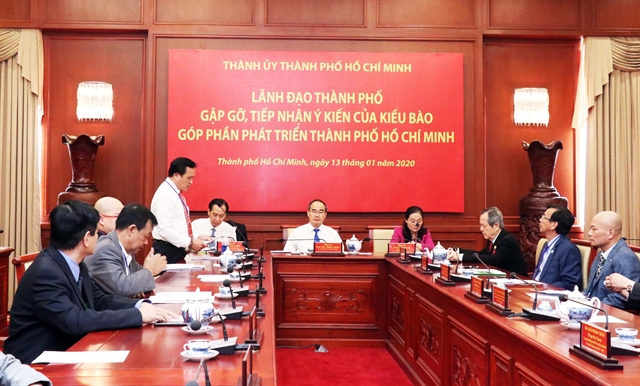 Overseas Vietnamese give their opinions to HCM City leaders at a meeting held on Monday. — VNA/VNS Photo Xuân Khu

The meeting created an opportunity for city leaders and overseas Vietnamese to meet and discuss the building and developing of the city in the international integration process.

Prof Đặng Lương Mô, an OV from Japan and a professor of Hosei University in Tokyo, has put forward a number of measures to help reduce traffic congestion in the city.

Meanwhile, the application of artificial intelligence in the city’s formation and development process was mentioned by an OV from South Korea, Prof Trần Hải Linh.

On behalf of the city government, Nhân received 11 opinions from the OV who are intellectuals, experts and businesspeople. He also directed agencies to consider the opinions and cooperate with authorised units to resolve these issues.

In the evening on the same day, the city also held a meeting to welcome more than 900 OV from 25 countries and territories and OV returning home for the Tết holiday.

Chairman of the municipal People’s Committee Nguyễn Thành Phong said the city’s achievements had benefited from the active contributions from the OV community.

“Overseas Vietnamese’s hearts always look toward their homeland,” he said. “The OV community is a bridge that helps the city expand international cooperation with other countries and enhance its position and prestige in the international arena.”

Last year, OV sent US$5.6 billion worth of remittances to HCM City, accounted for 30 per cent of the country’s remittances.

“The remittances were not only sent to their relatives but also used for investment,” Phong said.

Seventy-two per cent of the remittances were used for production and business purposes, he said.

More than 400 intellectuals and expatriates have returned to work in Việt Nam for long periods.

Nearly 200 intellectuals have cooperated with universities, high-tech zones and hospitals for their projects.

About 3,000 companies owned by OV have been granted business registration licences, with charter capital of VNĐ45 trillion (US$1.94 billion).

Every year, more than 30,000 young OV visit their homeland and find business opportunities with start-up projects.

Phong expected the OV to continue joining hands with the city in completing its goals this year.

On this occasion, three collectives and 19 individuals were awarded certificates of merit for their achievements in overseas work and outstanding contributions to the city’s development.

The meeting is an annual activity held to welcome OV coming home for the Tết holiday.

HCM City leaders praise overseas Vietnamese contributions have 684 words, post on vietnamnews.vn at January 14, 2020. This is cached page on VietNam Breaking News. If you want remove this page, please contact us.