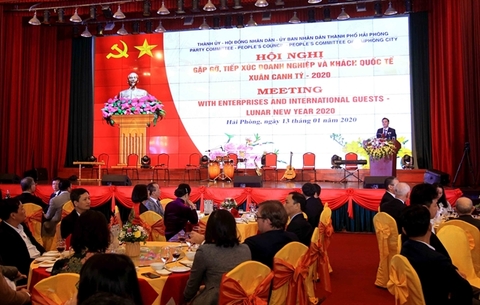 The meeting attracted more than 300 domestic and foreign-invested firms. — VNA/VNS Photo An Dang

The northern port city of Hai Phong continues to an attractive investment destination to domestic and foreign investors thanks to its robust economic growth and sound business climate, a provincial leader has said.

Chairman of the municipal People’s Committee Nguyen Van Tung delivered the statement at a meeting with more than 300 domestic and foreign-invested firms in the city on Monday.

During the event, Tung briefed participants on the city’s socio-economic achievements in 2019, with gross regional domestic product (GRDP) expanding 16.68 per cent, the highest level ever.

The chairman said the projects would give the city a facelift.

These firms also engaged in activities to support social welfare programmes in the locality, he said.

“This year Hai Phong aims to continue to improve the business investment environment and create the best conditions for businesses to expand production and improve competitiveness,” he noted.

Top priority should be given to enhancing transport and urban infrastructure to aid businesses, Hung said, adding that solving difficulties for businesses in a timely manner would be a focus. — VNS