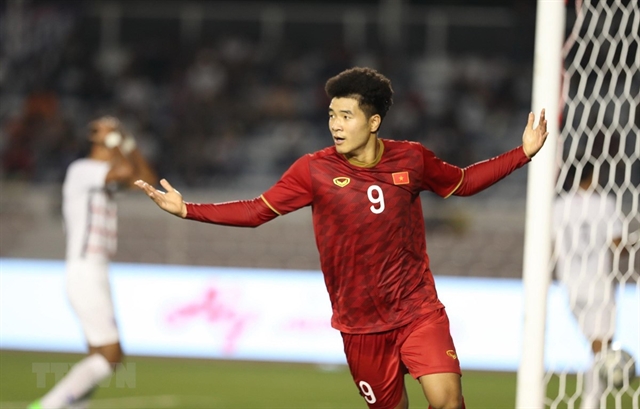 Việt Nam won in the match with Cambodia, booking itself a spot in Tuesday’s final against Indonesia.—VNA/VNS Photo

HÀ NỘI — Việt Nam’s U22s cruised into the final of the men’s football at the Southeast Asian Games on Saturday after crushing Cambodia 4-0 at Rizal Memorial Stadium in Manila, the Philippines.

The comfortable win booked Việt Nam’s spot in Tuesday’s final against Indonesia, who earlier in the day defeated Myanmar 4-2 after extra time.

Coach Park Hang-seo made two changes from the team that started the 2-2 group stage draw with Thailand on Thursday, with Hà Đức Chinh Chinh and Nguyễn Đức Chiến coming into the team.

Việt Nam took some time to settle into the game against their underdog opponents, but managed to open the scoring 19 minutes in.

After a good run from Chinh down the right, he crossed and Linh rose to head home powerfully.

Six minutes later Chinh got in on the act, robbing a Cambodian defender of the ball and slotting the ball past goalkeeper Keo Soksela.

It was almost a perfect half for Việt Nam, until Linh came off seemingly injured for Trương Văn Thái Quý in the 44th minute.

No matter, into added time in the first period Chinh had his second goal, meeting a cross from Quý with a diving header.

That goal made the second half something of a dead rubber, with Viet Nam rarely threatened by Cambodia.

Chinh tried to claim the fourth goal as he appeared to flick the ball on from a corner, but the final touch came off Cambodian defender Yue Safy for an own goal.

There was time late on for Cambodia to win a penalty after Đỗ Thành Thịnh handled in the box, but Nguyễn Văn Toản was equal to the effort and saved, shortly after which the final whistle blew.

Cambodia gave a good account of themselves in their first SEA Games semi-final, but in truth there was only ever going to be one winner.

While coach Park’s men made light work of their neighbours, the loss in the first half of striker Linh due to an apparent injury is cause for concern with captain Nguyễn Quang Hải already out injured.

Nevertheless, Việt Nam are one win away from gold and one massive party across the entire nation. — VNS