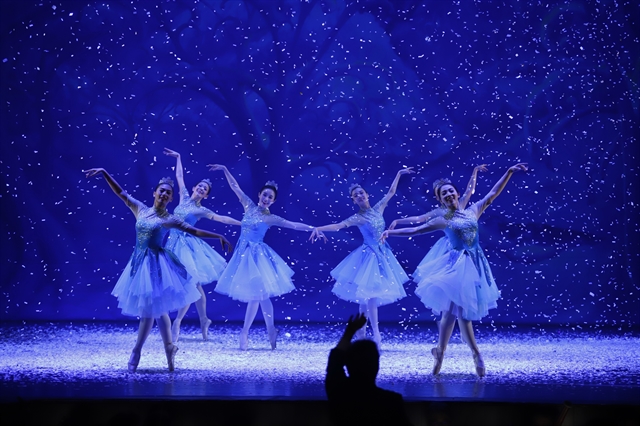 Dancers from the HCM City Ballet Symphony Orchestra and Opera will perform in the ballet The Nutcracker at the Opera House on Friday, Saturday and Sunday to welcome the Christmas season. Photo courtesy of HBSO

HCM CITY — The classical ballet The Nutcracker will return to the HCM City Opera House with performances on Friday, Saturday and Sunday from the HCM City Ballet Symphony Orchestra and Opera (HBSO).

The ballet is choreographed by Johanne Jakhelln Constant, art director of the Moving Art Theatre in Bodo, Norway, who previously worked with the HBSO to produce the ballet Cinderella. It premiered in HCM City in 2001 as part of the Norway government’s Transposition programme to bring classical music projects to Việt Nam.

The Nutcracker is based on the story The Nutcracker and the Mouse King by German author E.T.A. Hoffmann. The two-act work features the dream of the little girl Clara and her adventures with a nutcracker, a gift from her godfather.

It was first presented at the Mariinsky Theatre in St. Petersburg, Russia on December 17, 1892 and has become a worldwide favourite during the Christmas season.

Tomikawa studied classical ballet and graduated from the National Vaganova Ballet School in Russia in 1991. He has worked for the New National Theatre and Noriko Kobayashi Ballet Theater in Japan, and is now a member of the VolksTheater Rostock in Germany.

Hiroshige began practicing ballet at the age of 11, and began studying at the Australian Ballet School in 1993. She worked as a solo dancer at the New National Theatre from 1996, and later performed at Noriko Kobayashi Ballet Theater from 2005.

The performance will also feature dancers from HBSO’s ballet troupe.

The ballet’s music, composed by Tchaikovsky, will be performed by the HBSO symphony orchestra and feature a female choir.

Trần Nhật Minh, a graduate of the Moscow Tchaikovsky Conservatory, will conduct the orchestra.

He also won first prize at the 2009 Việt Nam National Competition of Voice-Dance and Music and the 2014 International Choral Festival organised by Interkultur in Hội An. He has performed with orchestras in Russia, France and Italy.

The Nutcracker will begin at 8pm at the Opera House at 7 Lam Sơn Square in District 1. Tickets are available at the venue and at www.ticketbox.vn. VNS