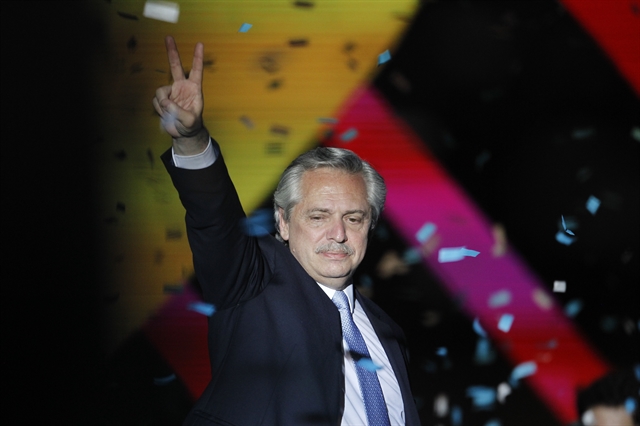 BUENOS AIRES — Centre-leftist Alberto Fernandez vowed to put his people first ahead of debt repayments after he was sworn in as Argentina’s president on Tuesday to singing and applause from lawmakers and supporters.

After taking over from the market-friendly Mauricio Macri, Fernandez sent a message to the International Monetary Fund, saying “it’s impossible to pay external debt without growth.”

While the South American country wants to pay back its debt, it doesn’t have “the means to do so,” he said, promising to deal with Argentina’s social emergency.

Fernandez was swept to power in large part due to a public backlash over the terms of a $57 billion loan Macri negotiated with the IMF last year.

its external debt to $315 billion, around 100 percent of gross domestic product.

“We want to have a good relationship with the IMF but without growth we won’t be able to pay,” said Fernandez, accusing Macri of leaving the country in “virtual default” following 18 months of economic turmoil triggered by a currency crisis.

IMF managing director Kristalina Georgieva said on Twitter: “We fully share your objectives of pursuing policies that reduce poverty and foster sustainable growth. The IMF remains committed to assisting your government in this endeavor.”

Fernandez also said Argentina needs to “overcome the rancor and hate” that has become a feature of its increasingly polarized political landscape.

He twice hugged Macri tightly during the ceremony.

Chile’s President Sebastian Pinera was due to attend but canceled after a Chilean Air Force plane went missing with 38 people onboard.

Ahead of Fernandez’s election victory, Bolsonaro had said that his government would turn Argentina into the new Venezuela, with Brazil likely to face a flood of Argentine refugees.

But from Brasilia, he did wish Argentina well under its new president.

Thousands of supporters took to the streets to celebrate Fernandez’s appointment, holding up signs and Argentina flags.

“We all feel that at last there’s a government that listens to the people,” said university professor Emanuel Bonie, 53. “This is a party for everyone.”

Moderate and pragmatic, Fernandez has never served in elected office but brings years of experience as a former top aide to late president Nestor Kirchner from 2003-2007, and briefly for his wife Cristina after she succeeded him.

After joining forces with Cristina Kirchner to unite a fragmented Peronist camp to win October’s elections, his main challenge will be to deliver on his promise to boost the economy, according to analysts Eurasia Group.

“He was elected to improve economic conditions, and there is a large share of the electorate that will be actively opposed to Fernandez and the Peronists,” said Eurasia.

“If he fails to deliver on the economy, they will become more active and popular support for him could drop quickly.”

His pick for economy minister, Martin Guzman, 37, will have the task of negotiating with the IMF and other international creditors on restructuring Argentina’s massive debt.

Guzman has criticized the use of austerity policies to solve debt crises, signaling a sharp shift from Macri’s belt-tightening.

“We are already working with the IMF,” Fernandez said over the weekend. “We have opened a negotiation process, we are satisfied with how it’s going.”

Economist Hector Rubini of the University of Salvador said the government is likely to maintain the strict exchange controls put in place by the Macri government in October, at least initially.

He said a new budget law will likely reallocate funds to fight poverty, which Fernandez called “a moral imperative”.

Fernandez has also pledged to move to legalise abortion, a bitterly divisive issue in Roman Catholic Argentina, pledging last month to send a bill to Congress as soon as possible.

He inherits a dismal economy that is projected to shrink 3.1 per cent this year, with inflation running at 55 per cent, poverty near 40 per cent, and unemployment at over 10 per cent.

But Fernandez said we wants “to be remembered for having been able to overcome the wound of hunger in Argentina.” — AFP