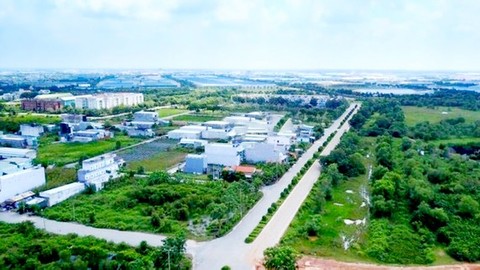 A corner of land expected to be part of a new 380ha industrial zone in HCM City’s Binh Chanh District. — Photo sggp.org.vn

The HCM City People’s Committee has submitted to the Prime Minister Nguyen Xuan Phuc a proposed zoning plan of 1/2000 scale for a new 380-hectare industrial zone in Binh Chanh District.

The area, which is covered with alum soil, is only useful for short-term crops with high alum tolerance like sugarcane, cassava, bananas and production forests as well as industrial crops such as rubber, tea plants, hybrid acacia and cajuput trees.

Because of the low land-use efficiency and economic value, continued cultivation would not be commensurate with the land value of the area. If approved, the large-scale centralised industrial zone will help attract investment in the area.

The new industrial park located in Pham Van Hai Commune will focus on science and technology, startups and the supporting industry, according to the city’s People’s Committee.

The city is shifting its economic structure towards services, industry and urban construction, focusing on high-tech industries and services to support urban activities.

An urbanisation rate of 80-90 per cent is expected by 2030. Accordingly, the city will restrict the use of land for agricultural cultivation.

The 380ha area is part of a larger 668ha area which has been approved by the Prime Minister for conversion to industrial land.

The new industrial park area is close to existing industrial zones like Vinh Loc and Pham Van Hai. As such, the entire area would be conducive for research, production, trade and distribution of goods.

The new industrial park will also have convenient traffic connections and infrastructure and will be accessible to main roads such as Highway 1A, HCM City – Trung Luong Highway and Ring Road 3, which crosses the industrial park and connects with the Mekong Delta province of Long An. — VNS

HCM City plans new industrial zone in Binh Chanh District have 435 words, post on bizhub.vn at December 24, 2019. This is cached page on VietNam Breaking News. If you want remove this page, please contact us.