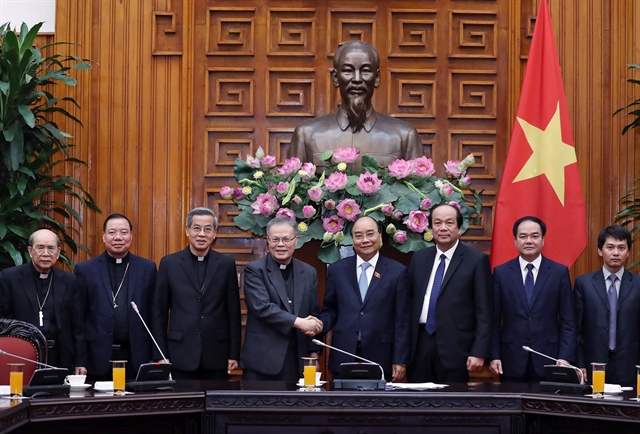 Phúc made was speaking while receiving a delegation of the Catholic Bishops’ Conference of Việt Nam (CBCV) led by its President Archbishop Nguyễn Chí Linh in Hà Nội on Monday. This followed the CBCV’s 14th congress in October, during which the conference elected its Standing Committee and heads of the subordinate committees for 2019-22.

The PM congratulated his guests on the success of the congress, expressing his hope the CBCV President and members of the Standing Committee will instruct priests, monks and followers of the Catholic Church in Việt Nam to continue adhering to the State’s laws and actively engaging in national development and defence.

As Christmas is nearing, he wished the archbishops and bishops a happy holiday season and to continue standing side by side with the Catholic Church and help the country develop.

Briefing his guests of outstanding development attainments, the Government leader said Việt Nam’s relations with other countries, including the Vatican, have been enhanced.

He attributed those achievements partly to practical contributions by Catholic in Việt Nam, noting they have taken an active part in development movements, especially the building of new-style rural areas.

Phúc also called on Vietnamese Catholics to further contribute to national development and defence and the great national unity bloc.

Informing the PM of the success of the CBCV’s 14th congress, Archbishop Linh appreciated the Government and local authorities’ support for the event.

He said he hopes the PM, Government and relevant agencies will continue supporting the CBCV’s activities and Catholic activities in the future and create favourable conditions for Catholic followers to keep contributing to national development. — VNS

PM receives members of Catholic Bishops’ Conference of Việt Nam have 507 words, post on vietnamnews.vn at November 19, 2019. This is cached page on VietNam Breaking News. If you want remove this page, please contact us.