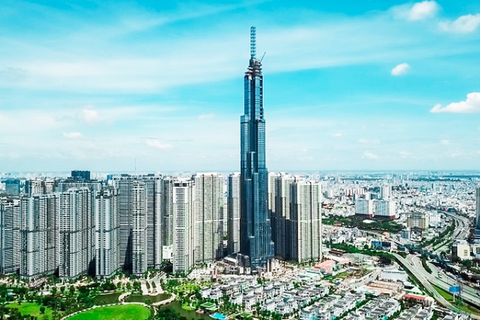 An overview of Landmark 81 project in HCM City, constructed by Cotec Construction Joint Stock Company (CTD). Early this year, the construction conglomerate spent VND430 billion to buy back 2.7 million shares. The value of the shares was equal to 55 per cent of the firm’s charter capital. — Photo vietvisiontravel.com

Following a global trend of share buybacks, many Vietnamese businesses are now repurchasing their own stocks to stablise prices.

When companies buy their own stocks, they reduce the total amount of shares on the market, inflating common metrics like earnings per share, which typically boosts the stock price.

While investor confidence, reacting to a worsening economic outlook, has deteriorated, the world’s largest economy has still recorded gains thanks to a series of rate cuts by the US Federal Reserve (Fed) and the wave of share buybacks of companies.

“Activity this year has slowed slightly, but remains on track to be one of the most active on record,” the newspaper said, adding that in the third quarter this year, US companies were expected to spend around $170 billion on their own stocks.

In Viet Nam, more than 25 enterprises that spent nearly VND18.4 trillion ($791 million) on their own stocks in the first nine months of this year, equivalent to 10.4 per cent of their total charter capital.

Early this year, the construction conglomerate Cotec Construction Joint Stock Company (CTD) spent VND430 billion to buy back 2.7 million shares. The value of the shares was equal to 55 per cent of the firm’s charter capital.

The amount of money firms spend on their own shares in Q4 is expected to soar as a series of businesses have announced buybacks plans. For example, Vinhomes (VHM) plans to spend VND5.6 trillion and Vincom Retail will use VND1.96 trillion.

Companies only repurchase shares when they have strong financial capacity. As in the case of the HVC Technology and Investment JSC (HVH), the firm plans to spend VND9.2 billion to buy back 500,000 shares, equivalent to 2.5 per cent of charter capital. Its leaders said the plan confirmed the firm’s financial capacity and created trust among shareholders.

The price of HVH shares has fallen 37.5 per cent from its peak reached in mid-August this year.

Enterprises also plan to repurchase shares with the aim of putting them up for sale at higher prices.

Military Bank (MBB) plans to issue more than 250 million shares this month, including both new shares and 47 million treasury shares the bank bought back in late February for VND1.3 trillion ($56 million).

According to the bank, the difference between the buying and selling price could reach over 30 per cent.

When a firm repurchases its own stocks, prices can be unpredictable, so it’s difficult for the firm to know if it is an effective investment decision.

If the stock price increases or the company itself needs capital, those treasury shares will be offered to the public.

The company collected VND1.14 trillion from the sale, 3.6 per cent higher than the amount spent to buy back 61 million shares in April 2018.

The Asia Commercial Joint Stock Bank (ACB) last month announced a plan to sell more than 35 million treasury shares to raise capital. The selling price is expected to be 48 per cent higher than the price the bank paid for the shares. — VNS

Firms rush to buy back shares following global trend have 739 words, post on bizhub.vn at November 26, 2019. This is cached page on VietNam Breaking News. If you want remove this page, please contact us.