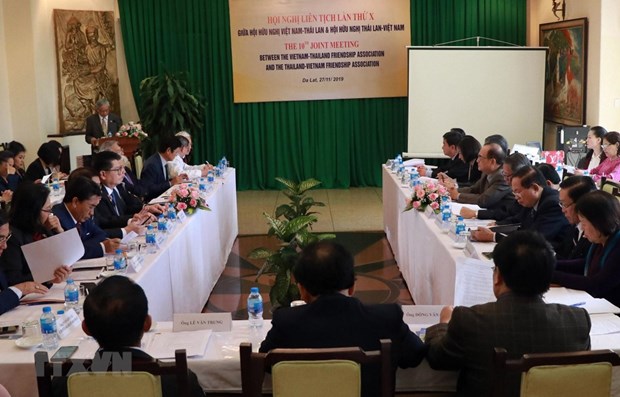 An overview of the conference (Photo: VNA)

President of the Vietnam-Thailand Friendship Association Ta Quang Ngoc said the event marks the 10th anniversary of the conference, which was first held in Thailand's Khon Ken city in March 2010.

He said that the conference is a chance for both sides to seek cooperation measures for the following years.

The two sides noted that the Vietnam- Thailand partnership has grown strongly over the past decade. Thailand has become the biggest trade partner of Vietnam among ASEAN countries with two-way trade being on the rise in recent years. The two sides are striving to raise bilateral trade to 20 billion USD in 2020.

In 2018, more than 300,000 Thai tourists visited Vietnam and over 1 million Vietnamese travelled to Thailand. So far, 16 provinces and cities of Vietnam have set up twin relations with Thai localities.

Participants at the conference agreed on the future orientations by optimising the role and positions of the two associations in fostering people-to-people exchange between the two nations, thereby enhancing the strategic partnership between Vietnam and Thailand.

Addressing the event, Vice Chairman of the Lam Dong People's Committee said that an air route connecting Da Lat and Bangkok was launched in December 2017 with 5-7 flights per week.

Lam Dong has actively sought partnerships with Thai partners, with the organisation of an investment, trade and tourism promotion conference in Bangkok in October 2018, which drew more than 300 delegates from Thai authorized agencies, businesses and investors.

Last year, Lam Dong welcomed about 40,000 Thai visitors. As of mid-November, the province served more than 36,000 Thai tourists, up 4.5 percent year on year, he added.

Associations seek measures to foster Vietnam-Thailand friendship have 523 words, post on en.vietnamplus.vn at November 27, 2019. This is cached page on VietNam Breaking News. If you want remove this page, please contact us.