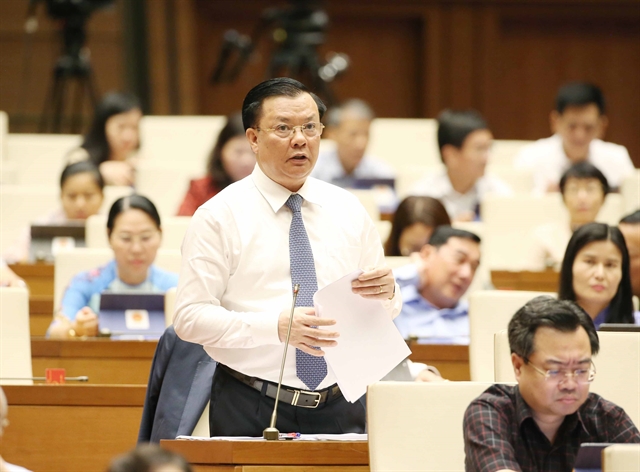 HÀ NỘI – The country’s outstanding tax payments had reached VNĐ88.25 trillion (US$3.8 billion) as of September, up 8.2 per cent from the end of 2018, Finance Minister Đinh Tiến Dũng said yesterday.

The figure included nearly VNĐ43 trillion worth of uncollectable tax, or 48.7 per cent of the total, he told the 14th National Assembly’s eighth meeting.

Uncollectable tax liability is caused by people – who either die, are declared missing or lose their civil act capacity – and businesses that are dissolved, go bankrupt or suffer from unexpected disasters.

More than 771,400 taxpayers registered with the tax agency owed more than VNĐ24 trillion to the State. Of the figure, late taxes and penalties were worth VNĐ10 trillion.

Taxpayers that had gone out of business or had their licences revoked owed nearly VNĐ9.47 trillion. Of the figure, late payment and penalties amounted to VNĐ4.17 trillion.

According to the minister, tax agencies had done well to collect late tax payments and penalties. The ratio of tax liability over domestic production fell to 6.9 per cent in late August from 12.2 per cent in 2014.

The Ministry of Finance has regulated how to deal with late tax payments and penalties to help local authorities.

However, some agencies have missed out on late taxes because there are no detailed policies to support them.

Dũng also proposed a draft resolution to write-off taxes and remove penalties for individuals and businesses unable to pay their taxes.

Under the resolution, the value of tax write-offs would hit VNĐ16.36 trillion.

Nguyễn Đức Hải, chairman of the National Assembly’s Committee for Finance and Budget, said the committee had agreed with the finance minister’s proposal.

Hải said that late tax payers were fined at a rate of 0.03 per cent per day, which had increased the value of uncollectable taxes and put pressure on tax agencies.

A number of individuals had been declared dead or missing while a number of businesses had been dissolved or gone bankrupt without making public announcements. That’s why tax agencies had been unable to track those records and erase taxes for them, he said.

Hải warned Government agencies to prevent taxpayers from taking advantage of the policy.

Non-public companies must comply with the Law of Enterprises when making a private securities deal, according to the NA Standing Committee.

Public companies must also follow the Law of Securities.

The separation would ensure public companies were treated differently from non-public firms in issuing private securities in order to protect shareholders.

But those companies were not subject to the management of the State Securities Commission (SSC), which is responsible for supervising public companies’ securities issuances.

NA Deputy Trần Hoàng Ngân argued that non-public firms should be regulated by the SSC and the Law of Securities.

A company should be considered non-public because there were only a few shareholders, not because it had small charter capital, he said.

Companies not regulated by the law could lead to trade fraud in securities trading, damaging investor confidence and gains, he added. – VNS

Tax liability reaches US$3.9 billion with nearly half being uncollectable have 652 words, post on vietnamnews.vn at October 23, 2019. This is cached page on VietNam Breaking News. If you want remove this page, please contact us.