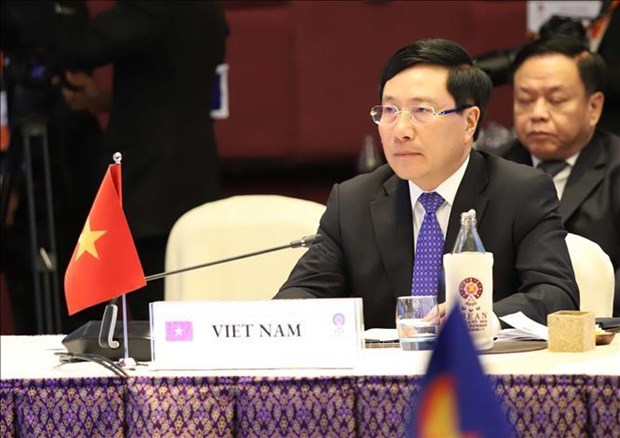 Minh made the assertion at ministerial meetings between ASEAN and its partners – Australia, India, the European Union (EU), the Republic of Korea, and Canada – within the framework of the 52nd ASEAN Foreign Ministers' Meeting (AMM-52) and related meetings in Bangkok, Thailand, on August 1.

Regarding the international and regional situations, the Deputy PM expressed his concern over complicated developments in the East Sea, including ongoing militarisation activities and unilateral actions against international law and the spirit of the Declaration on the Conduct of Parties in the East Sea (DOC), which have undermined trust and caused negative impacts on peace, security and stability in the region.

Minh reiterated the ASEAN's principled stance, under which he emphasised the importance of increasing trust, not militarising, restraining and not using or threatening to use force as well as strictly abiding by international law, including the 1982 United Nations Convention on the Law of the Sea (UNCLOS), and seriously and fully implementing the DOC and soon completing an effective and practical Code of Conduct in the East Sea (COC) in accordance with international law.

At the ASEAN-Australia Ministerial Meeting, both sides agreed to step up cooperation priorities such as implementing the ASEAN-Australia Counter-Trafficking Initiative (2018-2028), intensifying cooperation in marine security, counterterrorism and fighting cross-border crimes, promoting and protecting the rights of women and children, boosting partnership in education and training, and developing high-quality human resources.

They affirmed to maintain efforts towards the upgrading of the ASEAN-Australia-New Zealand Free Trade Agreement (AAZFTA) to facilitate the development of micro-, small- and medium-sized enterprises, expand investment and strengthen sub-regional connectivity and cooperation.

On this occasion, the ministers approved the ASEAN-Australia Plan of Action for the 2020-2024 period.

At the ASEAN-India Ministerial Meeting, the ministers were unanimous in fostering collaboration in marine affairs and blue economy, information technology, health, pharmaceuticals, human resources training, connectivity and infrastructure, including a plan to connect expressways from the ASEAN countries to India.

The Indian Foreign Minister shared views on several shortcomings in negotiations, affirming that India will work with the ASEAN countries to soon finish negotiations on the Regional Comprehensive Economic Partnership (RCEP). The official also spoke highly of Vietnam's contributions to boosting ties between the two sides in its capacity as the coordinator for ASEAN-India relations in the 2015-2018 period.

At the ASEAN-EU Ministerial Meeting, the two sides agreed that ASEAN and the EU are the most successful regional organisations which lead the world in boosting regional connectivity, multilateral cooperation and trade-investment liberalisation. 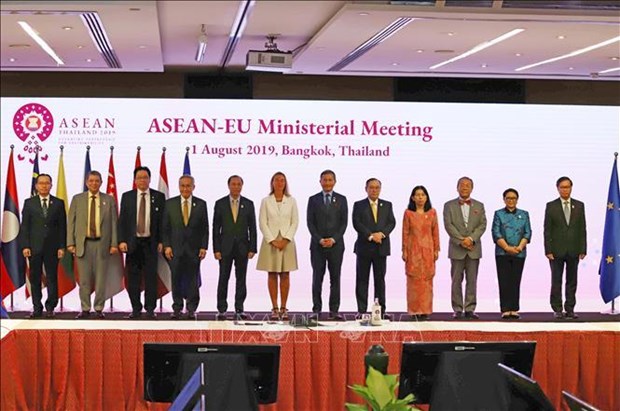 Both sides acknowledged the EU's ratification of a free trade agreement (FTA) with Singapore and its signing of another FTA with Vietnam, considering them as important steps towards the building of an FTA between the two blocs in the future.

At the ASEAN-Republic of Korea Ministerial Meeting, ASEAN member states welcomed the RoK's efforts to carry out its New Southern Policy in order to intensify cooperation with the ASEAN in "three Ps" – Peace, Prosperity and People.

The ASEAN welcomed the RoK's proposal to boost cooperation in highly skilled labour, and expand scholarship and vocational training programmes for the bloc's member states.

Both sides agreed to early finalise an ASEAN-RoK Air Service Agreement, work to increase the number of tourists to 15 million by 2020, and coordinate closely to organise the Commemorative Summit to mark 30 years of ASEAN-RoK relations in Busan in late 2019.

At the ASEAN-Canada Ministerial Meeting, the two sides agreed to boost cooperation in the fight against terrorism, extreme violence and cross-border crimes, expanding trade-investment, connectivity, science-technology, renovation, protecting the environment, coping with natural disasters and climate change, training human resources, and increasing the number of tourists between the two sides.

They also pledged to reinforce an equal and rule-based multilateral trade system, enhance dialogue mechanisms on trade between ASEAN and Canada, and closely coordinate together within the frameworks of the Asia-Pacific Economic Cooperation (APEC) Forum and the Comprehensive and Progressive Agreement for Trans-Pacific Partners hip (CPTPP).

Within the framework of the AMM-52 and related meetings, Deputy PM and FM Pham Binh Minh had a meeting with Chinese State Councillor and Foreign Minister Wang Yi, during which he said Vietnam attaches importance to the neighbourliness with China.

Minh affirmed Vietnam's principled standpoint on the current maritime issues, saying that the two sides need to make efforts to maintain peace, stability and good control of disputes and not have actions that complicate the situation, and resolve satisfactorily disputes in the East Sea through peaceful measures on the basis of seriously obeying international law, including the UNCLOS 1982.

Wang said the Chinese Party and Government treasure ties with Vietnam and will spare no effort to maintain friendly relations between the two countries. He agreed to exchange views to address satisfactorily arising issues in the bilateral relationship.

Vietnam vows to work for expanded ties between ASEAN and partners have 1159 words, post on en.vietnamplus.vn at August 2, 2019. This is cached page on VietNam Breaking News. If you want remove this page, please contact us.