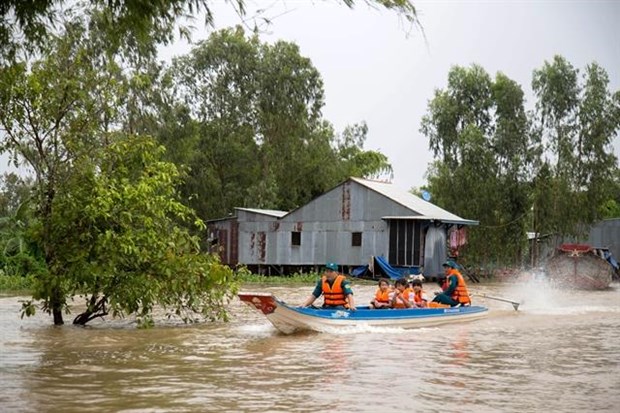 – The Mekong Delta will not have early or intense flooding in its upper parts this year because of the low water level in the Mekong River , according to the National Centre of Hydro-Meteorology Forecasting .

The river's low level is due to the lack of rainfall this year. However, the construction of dams in the Mekong River's upstream in other countries poses an increased risk of a rapid rise in water levels in the delta when there are heavy rains and the dams release large quantities of water, the centre said.

The annual flooding in the delta, caused by the rising levels in the Mekong River during the rainy season, could peak at warning level 1 or 2 this year, lower than in many years, it said.

Besides, in June and July the water level in the upper areas of the delta was 10-20cm lower than in many years.

The low water levels in the Mekong and its tributaries this year will cause severe drought and saline intrusion in the delta during the next dry season, according to experts.

The construction of flood control dykes in its upper areas to grow the year's third rice crop has reduced the delta's floodwater retention capacity.

The upper areas include the Dong Thap Muoi (Plain of Reeds) in Long An and Dong Thap provinces and the Long Xuyen Quadrangle in An Giang and Kien Giang provinces.

When floods enter the delta, water cannot flow into areas with dykes and most of it is drained by rivers. When the dry season comes, the delta thus faces a freshwater shortage.

Le Anh Tuan, deputy head of the Can Tho University's Research Institute for Climate Change, said the delta should not build any more closed flood control dykes so that it could retain the water that flows in during the flooding season.

Besides, it should reduce its rice growing area, especially for the third rice crop planted in the flooding season, he said.

They include reducing cultivation of the third rice crop and instead releasing the floodwaters into rice fields to improve their fertility and retain water.

In their flooded rice fields, farmers can raise aquatic creatures or plants to ensure an income during the flooding season.

An Giang and Dong Thap provinces in the upper delta plan to stop growing the third rice crop in many areas and instead open the flood control dykes and let the waters in.

Dong Thap's Thap Muoi, Hong Ngu and Tan Hong districts have stopped building dykes to protect the third crop. They have introduced other farming models during the flood season such as raising shrimp and lotus plants in rice fields.

Vo Thi Thanh Van, deputy director of the An Giang Department of Agriculture and Rural Development, said the department had told these districts and town to stop growing the third rice crop. Farmers should raise aquatic creatures and plants in their rice fields to earn an income during the flooding season, she said.

"Districts and towns should step up inspection of flood control works for safety before allowing the floodwaters into rice fields," she said.

Tran Anh Thu, Vice Chairman of the An Giang People's Committee, said though the forecast is for low flood levels this year, local authorities should not neglect the task of flood control.

The province will review the number of households living along rivers, canals and low-lying areas at risk of erosion and flooding and make plans to relocate them to safer areas, according to the An Giang Department of Agriculture and Rural Development.

Hau Giang, Bac Lieu, Soc Trang, and Kien Giang provinces have decided to switch to crops adapted to drought and saltwater in affected areas during the upcoming dry season.

Soc Trang, for instance, has instructed farmers to use more than 1,800ha of sugarcane farms for raising aquatic creatures and grow other short-term crops on low-yield rice fields.

Mai An Nhin, Vice Chairman of the Kien Giang People's Committee, said rice fields with low yields in the dry season were increasingly used to breed shrimp then. The province's biggest concerns now were coastal and river erosion and keeping out saltwater from rivers, he added.-VNS/VNA

Mekong Delta forecast to have small floods this year have 885 words, post on en.vietnamplus.vn at August 4, 2019. This is cached page on VietNam Breaking News. If you want remove this page, please contact us.