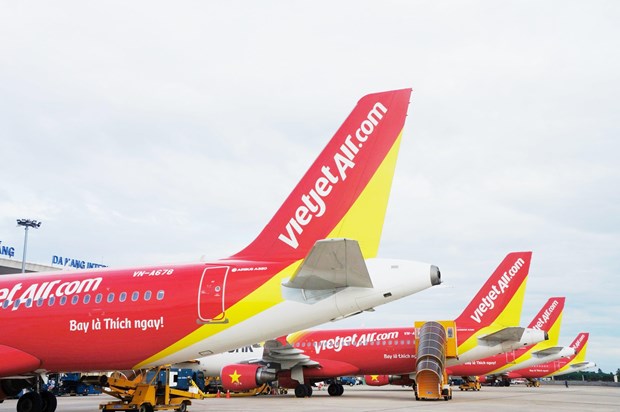 This information was delivered by the airline during the Kien Giang Investment Promotion Conference held on July 29 in the presence of Prime Minister Nguyen Xuan Phuc, senior State leaders and representatives from ministries, organisations as well as domestic and international investors.

The Phu Quoc-Da Nang and Phu Quoc-Van Don routes will be operated from late this year and the middle of next year, respectively, with a frequency of seven flights per week.

Meanwhile, two new international routes – Phu Quoc-Chengdu and Phu Quoc-Chongqing – will be launched from late this year with three round-trip flights per week.

Vietjet said it will increase the frequency of two operating international routes linking Phu Quoc with Hong Kong and Incheon (the Republic of Korea) to six flights per week and 14 flights per week, respectively, this winter to meet the rising demand of passengers.

Since the first flight to Phu Quoc in 2012, Vietjet has continuously expanded its flight network, connecting the island to many provinces, cities, and other countries in the region. That has helped connect trade and tourism to facilitate residents, tourists and investors to Phu Quoc and Kien Giang province, while also contributing to speeding up local economic growth.

"With huge economic, tourism potential, Phu Quoc Island and Kien Giang Province is expected to become an economic leader of the southern region, an attractive destination for tourists and investors, especially when air transport becomes more convenient than ever with many new routes will be operated in the near future," Vietjet said in a statement.

Vietjet is the first airline in Vietnam to operate as a new-age airline offering flexible, cost-saving ticket fares and diversified services to meet customers' demands. It provides not only transport services but also uses the latest e-commerce technologies to offer various products and services for consumers.

Vietjet is a fully-fledged member of International Air Transport Association (IATA) with the IATA Operational Safety Audit (IOSA) certificate. Vietjet was named "Best Ultra Low-Cost Airline 2018 – 2019" and awarded the highest ranking for safety with 7 stars in 2018 and 2019 by the world's only safety and product rating website AirlineRatings.com. The airline has also been listed as one of the world’s 50 best airlines for healthy financing and operations by Airfinance Journal in 2018.

Vietjet to open new routes from Phu Quoc have 589 words, post on en.vietnamplus.vn at July 30, 2019. This is cached page on VietNam Breaking News. If you want remove this page, please contact us.