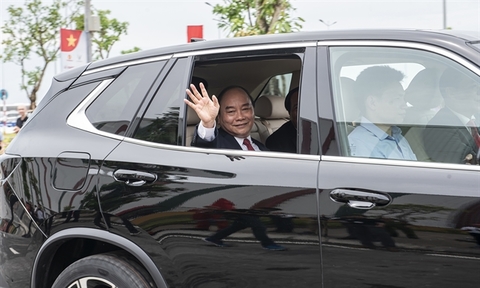 Prime Minister Nguyen Xuan Phuc in a new VinFast car. He said he expected VInFast to initiate a wave of growth for the Vietnamese support industry. — Photo Vingroup

Vietnamese automaker VinFast, a subsidiary of Vingroup, inaugurated its manufacturing plant yesterday in the northern city of Hai Phong.

Speaking at the inauguration ceremony, Prime Minister Nguyen Xuan Phuc said he was impressed with the speed at which the factory was completed, noting that it had only been 650 days since he attended the groundbreaking ceremony on September 2, 2017.

“About 21 months ago, the name VinFast was not even mentioned on Wikipedia. After starting from zero, there are more than 8.8 million results on Google today. Newspapers, analysts and the online community are all talking about VinFast,” PM Phuc said.

Deputy Chairman and CEO of Vingroup Nguyen Viet Quang said that in 21 months the company had launched to the public a line of electric motorcycles and three types of cars including a sedan, an SUV and a small car.

The company is still working at a fast clip, and is currently designing 12 new models of cars and electric scooters for release this year and next.

“Within such a short time frame, VinFast has established new records in the world’s automobile industry,” Quang said.

Quang said VinFast had also established a new feat in the automotive market by taking 10,000 orders before having released a vehicle.

Prime Minister Phuc said “the opening of the plant represents the realisation of a long dream”.

“VinFast did a great job because it dared to stand on the shoulders of giants in the industry,” he said. “Friends who helped and co-operated with VinFast are also friends of Viet Nam. Thanks everyone!”

PM Phuc said the impressive results of VinFast and other firms in Viet Nam had reinforced the Party’s view that the private sector is an important driving force for the country’s economy.

The government leader said he expected VinFast to actively co-operate with Vietnamese automobile manufacturers and assemblers such as Thaco, Thanh Cong and Toyota Motor Vietnam, all of which are aiming to establish a solid position in the domestic market and bring the Vietnamese automobile industry to the region and the world.

“The Government will always support all capable, brave, professional, aspiring and prestigious investors,” the PM said.

“I want VinFast with its vision to lead the development of the Vietnamese support industry – a current weakness in our industry,” Phuc said.

He said the country’s GDP per capita was increasing along with the living standards of most households, creating the conditions for more people to start to buy cars.

There is a huge opportunity for the domestic automobile industry to grow, according to DeLuca.

VinFast will soon hand over its first cars, beating its own schedule by about two months. VinFast’s Fadil cars will be handed over starting on June 17 this year, while the Lux A2.0 and Lux ​​SA2.0 will be delivered starting at the end of July.

Built on an area of ​​more than 500,000 sq.m of the complex’s total area of 335ha in Dinh Vu-Cat Hai Industrial Park and equipped with modern technology, the plant is designed to have a capacity of 250,000 vehicles per year in the first phase. The second phase will see capacity increase to 500,000 cars per year by 2025. — VNS