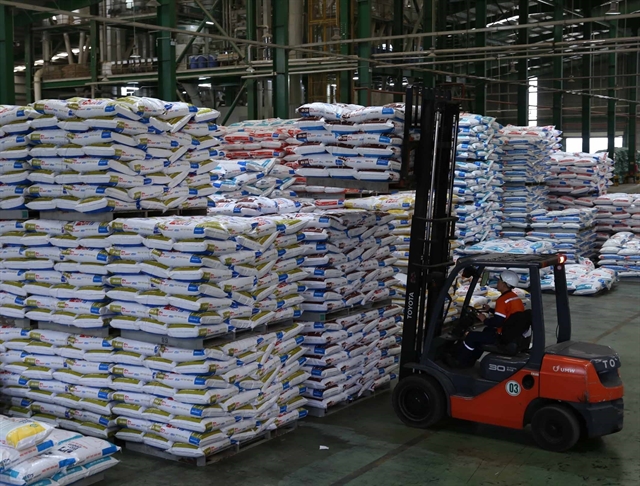 The benchmark VN-Index on the Hồ Chí Minh Stock Exchange edged down 0.25 per cent to close at 983.78 points.

It gained as much as 0.60 per cent during the trading day.

The VN-Index has lost a total of 0.34 per cent in the last two days.

Market trading liquidity dropped from Tuesday to nearly 175 million shares in volume and VNĐ3.94 trillion (US$169.5 million) in value.

Following the cool down on Tuesday, the VN-Index continued being challenged by the rise of selling pressure.

The VN-Index totalled a seven-day rally of 4.23 per cent before losing the last two days.

“It’s quite normal for the market to start declining because a number of stocks have reached the expected price levels,” Sài Gòn-Hà Nội Securities (SHS) said in its daily report.

Pulling the stock market down were insurance-finance, real estate, technology, petroleum and energy, food and beverage, and construction sectors.

Those were also the industries that had helped the market rally for seven consecutive trading days.

Meanwhile, shares of banks and brokerage firms gained slower because some of those firms’ stocks lost momentum.

Large-cap VN30-Index also succumbed 0.41 per cent to close at 897.66 points with 17 of the 30 largest stocks by market value and liquidity declining.

“Technical indicators are showing the stock market is still moving in its short-term uptrend and the likes of today decline are opportunities to buy more shares,” SHS said.

The important thing is “investors are still optimistic about the market short-run”, SHS added.

With strong purchasing power, investors are clearly expecting the Vietnamese stock market will bounce back strongly and head to 1,000 points in the near future, Thành Công Securities Co (TCSC) said.

However, lower trading liquidity may deter the market growth and investors should be careful, according to MB Securities JSC (MBS).

There are still some factors that could derail the market’s uptrend such as the uncertainty of the US-China trade relation, MBS said in its daily report.

Worries about Huawei’s case eased after US president Donald Trump stalled to add Huawei into his blacklist as it could dampen the US and China’s efforts to reach a consensus on bilateral trade.

The northern market index has dropped total 0.18 per cent in the last two trading days.

More than 53.4 million shares were traded on the Hà Nội market, worth VNĐ646 billion.  VNS

VN stocks fall for a second day have 517 words, post on vietnamnews.vn at May 22, 2019. This is cached page on VietNam Breaking News. If you want remove this page, please contact us.