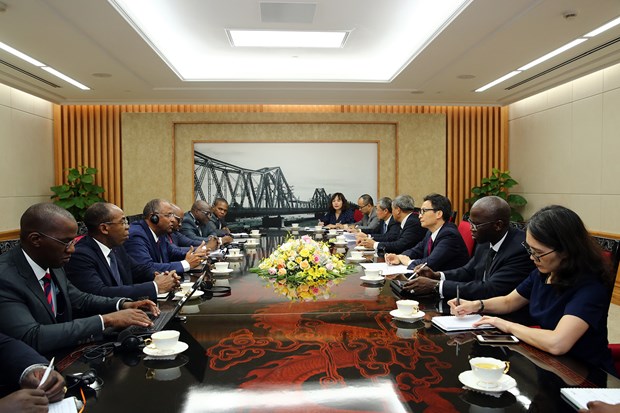 The leader made the statement in Hanoi on May 31 while Minister and Secretary General of the presidency Patrick Achi and a high-ranking delegation of Ivory Coast, who are visiting Vietnam.

At the meeting, Dam spoke highly of the traditional partnership between the two nations, as well as support and sentiments of people of the African country towards Vietnam over the time.

Since Vietnam and Ivory Coast set up diplomatic ties in 1975, the countries have joined hands in various multilateral forums, he noted. With two-way trade reaching about 1 billion USD in 2018, Ivory Coast is Vietnam's second largest trade partner in Africa at present.

The countries need to determine fields of mutual concern, such as human resources, digital economy and economic structure transition, the Deputy PM said.

Dam underlined the establishment of cooperation mechanisms at governmental and ministry levels to strengthen the bilateral cooperation and friendship, benefitting firms and people of the two countries.

In reply, Achi said during the visit, his delegation had working sessions with leaders of the Government Office, the Ministry of Information and Communications and the Ministry of Agriculture and Rural Development to discuss the implementation of e-government and digital economy.

The delegation also made fact-finding trips to northern Quang Ninh province, along with Can Tho city and Ho Chi Minh City in the south, he noted.

Vietnam ready to share experience with Ivory Coast: Deputy PM have 397 words, post on en.vietnamplus.vn at May 31, 2019. This is cached page on VietNam Breaking News. If you want remove this page, please contact us.