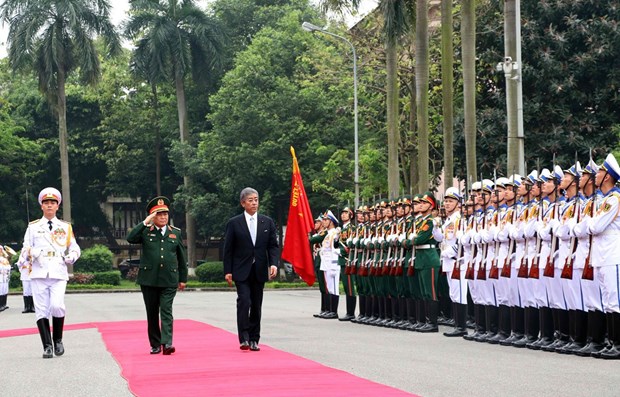 The talks took place during the Japanese defence minister's official visit to Vietnam from May 2 to 4.

The two defence ministers vowed to make good use of existing cooperation mechanisms and boost defence ties in accordance with signed agreements, including the Joint Vision Statement on Vietnam – Japan Defence Cooperation towards the next decade. They also pledged to coordinate closely as co-chairs of  the ASEAN Defence Ministers’ Meeting Plus (ADMM-Plus) Experts' Working Group on Peacekeeping Operations when Vietnam assumes the role of ASEAN Chair in 2020.

The two countries will continue their partnership in training, capacity improvement, information technology, UN peacekeeping mission, military medicine, defence industry for the sake of peace, stability and prosperity in the region.

Host and guest shared the view that defence cooperation is one of the important contents of the Vietnam – Japan extensive strategic partnership. In line with the Memorandum of Understanding on defence cooperation and exchanges signed in October 2011 and the Joint Vision Statement on Vietnam – Japan Defence Cooperation towards the next decade signed in April 2018, cooperation agenda has been expanded, making positive contributions to political trust and ensuring security in each country.

On the occasion, Lich thanked Japan for its active and effective support in post-war recovery in Vietnam as well as its initiatives on cooperation mechanism within the ADMM framework.

Since 2009, Japan has provided nearly 5.5 million USD in aid for two bomb and mine clearance projects in the central provinces of Quang Tri and Ha Tinh. The High Command of Chemical Arm of the Vietnam People's Army is working with Japan's Shimizu company in a project to test dioxin treatment technologies at Bien Hoa airport while the Japan International Cooperation Agency (JICA) is considering the supply of equipment for the assessment and control of dioxin contamination.

Following the talks, the two defence ministers witnessed the signing of an MOU on orientations to develop cooperation in defence industry between Vietnamese and Japanese defence ministries.

During the three-day stay, the Japanese delegation will pay a courtesy call to Prime Minister Nguyen Xuan Phuc, among other activities.-VNA

Vietnam, Japan reinforce defence links have 537 words, post on en.vietnamplus.vn at May 2, 2019. This is cached page on VietNam Breaking News. If you want remove this page, please contact us.