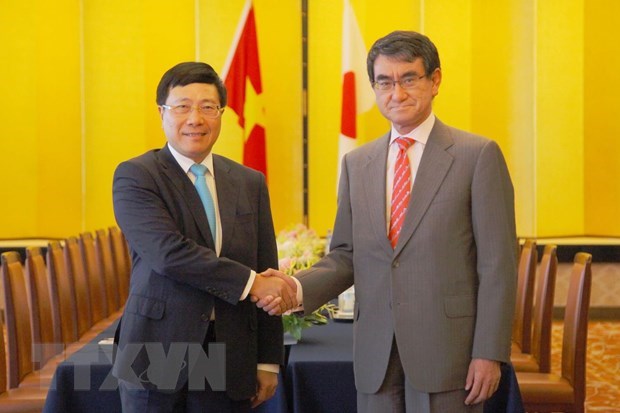 During the events, the two sides agreed to enhance win-win cooperation between the two economies through expanding connection in investment, trade, industry, energy, and agriculture.

They reached a consensus on promoting cooperation in receiving Vietnamese workers and trainees, as well as in the strict handling of establishments that are sending and receiving labourers and overseas students who violate laws of both Vietnam and Japan. They agreed to push for the early signing of an agreement on the transfer of convicted persons.

Deputy PM and FM Minh asked the Japanese side to simplify procedures to grant visas for Vietnamese citizens to enter Japan.

The two sides agreed to strengthen coordination at international and regional forums, promote international economic links, including the effective implementation of the Comprehensive and Progressive Agreement for Trans-Pacific Partnership (CPTPP).

During the meeting, the two sides reviewed the results achieved since the 10th meeting of the VJCC, noting the signing of a series of cooperation agreements on supporting Vietnam in developing agricultural value chains, implementing marine and oceanic policies, fire fighting, and cooperation orientations for the defence industry.

They discussed measures to promote the implementation of agreements reached by high-ranking leaders of the two countries, towards making the Vietnam-Japan intensive strategic partnership more effective and practical.

They agreed to enhance visits of high-ranking leaders of the two nations; maintain and improve the effectiveness of exchange and dialogue mechanisms between the Vietnamese and Japanese governments, ministries, and sectors; and debated measures to push cooperation in term of official development assistance.

The two sides exchanged views on international and regional issues of mutual concern, affirming that they will work closely for the success of the G20 Osaka Summit in Japan in June.

He also spoke highly the role played by Vietnam in the region, especially in the context that Vietnam is the coordinator of the ASEAN-Japan relations and will be the Chair of ASEAN in 2020. He expressed the desire to work closely with Vietnam to promote cooperation between Japan and the Southeast Asian region. –VNA

Vietnam, Japan agree to expand economic bond have 545 words, post on en.vietnamplus.vn at May 30, 2019. This is cached page on VietNam Breaking News. If you want remove this page, please contact us.