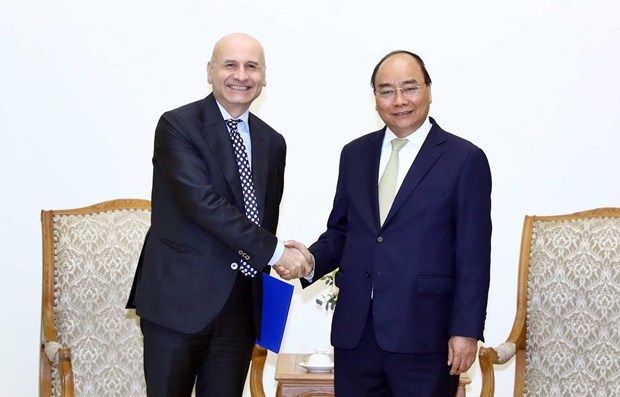 Hosting a reception for Italian Ambassador to Vietnam Antonio Alessandro in Hanoi on April 1, PM Phuc said that the two countries have enjoyed sound relations over the past 46 years, particularly after they established a strategic partnership in 2013.

He expressed his hope that the Italian diplomat will do his utmost to make practical contributions to boosting bilateral cooperation, especially in the fields of economy and trade.

The two-way trade value of 5 billion USD in 2018 is still modest in comparison to the collaborative potential between the two countries, PM Phuc said, recommending that both sides increase business delegation exchanges in order to resolve bottlenecks that hinder their cooperation.

PM Phuc highlighted the importance of the European Union-Vietnam Free Trade Agreement (EVFTA) to cooperation between Vietnam and the EU, including Italy, and hoped to receive Italy's support so that the deal can be ratified soon.

Hailing Alessandro's suggestion to open a Vietnam-Italy non-stop flight, PM Phuc endorsed the idea which, he said, will help enhance exchange and cooperation between the two nations.

The Italian Ambassador said that the two countries could increase collaboration in the tourism sector, with Italy granting 10,000 visas for Vietnamese tourists in 2018, while some 65,000 Italians visited the Southeast Asian country in the same year.

Alessandro stressed that he would make efforts to accelerate the opening of the Vietnam-Italy direct flight during his tenure, revealing that the Italian Embassy is in discussions with several airlines on the plan.

Furthermore, Alessandro suggested promoting educational collaboration, with many deals already having been signed between universities of the two nations.

The Italian Government has plans to provide development assistance for Vietnam in the fields of the environment, training, and energy, he added.

In addition, he expressed his wish to strengthen statistics cooperation with Vietnam, saying that the Italian National Institute of Statistics could help Vietnam with informal economic statistics. –VNA

Vietnam rolls out red carpet for Italian investors: Prime Minister have 456 words, post on en.vietnamplus.vn at April 1, 2019. This is cached page on VietNam Breaking News. If you want remove this page, please contact us.