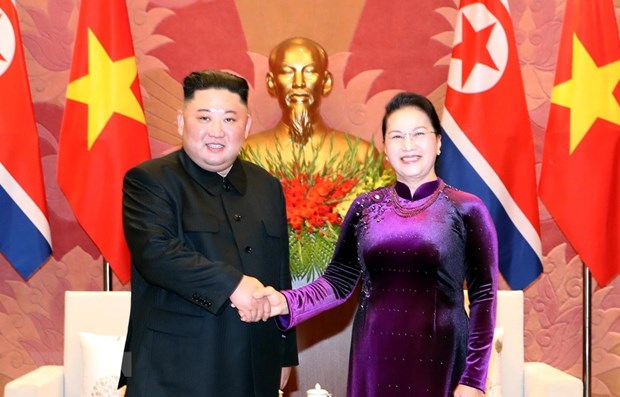 Meeting with Chairman of the Workers' Party of Korea (WPK) and the State Affairs Commission of the DPRK Kim Jong-un in Hanoi on March 1, the top Vietnamese legislator said that the DPRK Chairman's official visit to Vietnam will create a historic milestone in the bilateral relations.

Chairwoman Ngan expressed her belief that under the leadership of the WPK and Chairman Kim, the DPRK will reap more fruits in socio-economic development, thus improving living conditions of its people.

Wishing the East Asian country success with its 14th Supreme People's Assembly, the NA Chairwoman said that the Vietnamese legislature stands ready to promote exchange and cooperation with its DPRK counterpart in the time to come.

She briefed the DPRK Chairman on the Vietnamese NA's recent activities and suggested both sides enhance collaboration via exchanges of delegations at all levels, and sharing of information and experiences.

As the two countries are celebrating 70 years of diplomatic relations in 2020, both sides need to coordinate to organise practical activities to bolster friendship, mutual trust, and understanding, as well as impulse cooperation between the two parties and nations, she stressed.

Regarding the second meeting in Hanoi between US President Donald Trump and DPRK Chairman Kim, Chairwoman Ngan lauded the efforts made by the two leaders. She hoped that they will continue dialogues to handle issues related to the Korean Peninsula and improve US-DPRK relations, contributing to the maintenance of peace, stability, cooperation, and development on the Korean Peninsula, the region, and the world as well. 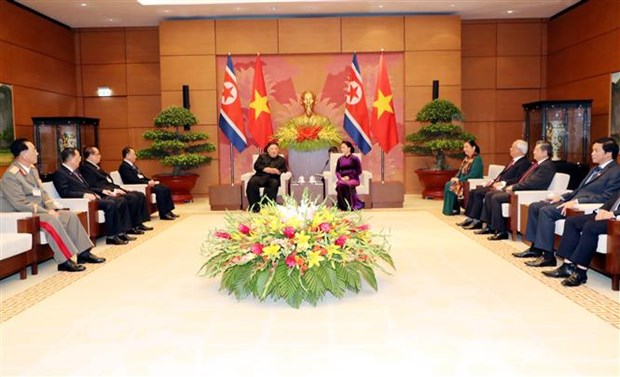 The Vietnamese top legislator hopes the US and the DPRK will continue dialogues to handle issues on the Korean Peninsula. (Photo: VNA)

Chairman Kim, for his part, informed the Vietnam ese leader on the DPRK's stability and development in all aspects, while congratulating Vietnam on its socio-economic achievements over the past years under the leadership of the Communist Party of Vietnam.

He reiterated the DPRK's consistent stance on continuing to reinforce and develop the traditional friendship with Vietnam, which was built and nurtured by Vietnamese President Ho Chi Minh and DPRK Chairman Kim Il-sung.

The DPRK Chairman said his official visit to Vietnam aims to elevate the bilateral relations to a new height.

He also spoke highly of and thanked Vietnam for its careful preparations and support for the second DPRK-USA summit.–VNA

Vietnam treasures traditional friendship with DPRK: NA Chairwoman have 544 words, post on en.vietnamplus.vn at March 1, 2019. This is cached page on VietNam Breaking News. If you want remove this page, please contact us.