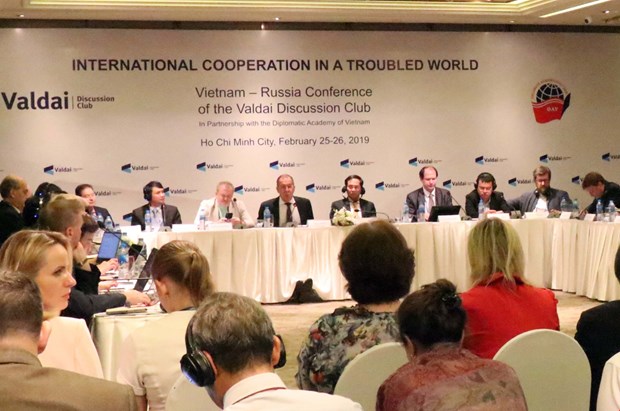 Scene at the event (Source: VNA)

HCM City (VNA) – A two-day seminar on international cooperation in a changing world convened in Ho Chi Minh City on February 25 as part of the Vietnam Year in Russia and the Russia Year in Vietnam in 2019 programme.

Co-organised by the Diplomatic Academy of Vietnam's Institute for Foreign Policies and Strategic Studies and the Russian-based Valdai Discussion Club, the event gathers experts and public officials. Their discussions are set to revolve around the topics of Asia security affairs; multilateral cooperation in Asian and Eurasia; and post-2019 prospects for the Vietnam – Russia relations.

Delivering his opening speech, Deputy Foreign Minister Bui Thanh Son said the presence of visiting Russian Foreign Minister Sergey Lavrov at the seminar not only reflects its importance but also affirms the long-standing traditional ties between the two nations.

He highlighted that Vietnam and Russia share a high level of political trust, increasing economic-trade cooperation, strong security-defence ties, and extensive collaboration in culture-society and education-training.

The diplomat expected participating scholars and experts to clarify key features of the international context, which is undergoing radical changes, assess opportunities and challenges affecting the bilateral relations, and put forth policy recommendations for both sides.

He stated that based on the current fruitful ties, Vietnam and Russia could together capitalise on opportunities and overcome challenges to push their cooperation to new heights, benefiting the two nations, the region, and the world as well.

Agreeing with Son, Lavrov said the relationship between Russia and the Association of Southeast Asian Nations (ASEAN) is important in coping with global changes.

He recommended the sides, based on their common concerns, make efforts in building trade and security cooperation mechanisms in search of solutions that could lead to regional and global peace and stability.

The Russian FM said his country is an integral member of the Asia – Pacific and always attentive to increasing cooperation with other countries in the region, particularly Vietnam, in cybersecurity, health, and combating terrorism and illegal immigration, among others.

He said the Vietnam – Russia collaboration is getting closer across defence, economy, culture, education, and tourism, adding that the two share similarities in their stances regarding international issues and both are highly committed to international conventions on external relations.

Russia considers the partnership with Vietnam a key part in its relations with the ASEAN, the diplomat stated, stressing his belief in future growth of the ties.-VNA

Seminar discusses Vietnam – Russia cooperation amid global changes have 549 words, post on en.vietnamplus.vn at February 25, 2019. This is cached page on VietNam Breaking News. If you want remove this page, please contact us.