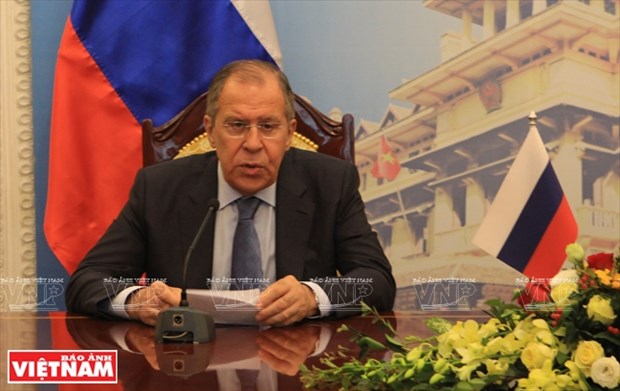 Moscow (VNA) – As strategic partners, Vietnam and Russia have maintained fruitful political dialogues and effective cooperation in different spheres, Russian Foreign Minister Sergey Lavrov said in an interview to the press ahead of his official trip to Vietnam from February 24-25.

Lavrov affirmed that Russia has been coordinating closely with Vietnam in international issues at the United Nations and regional mechanisms as well as within the framework of the strategic partnership between Russia and the Association of Southeast Asian (ASEAN).

According to the minister, Vietnam-Russia trade exceeded 6 billion USD last year, and Vietnam is currently one of the nations with the largest numbers of students in Russia, standing at 6,000, of whom 2,000 have received scholarships from Russia.

Highlighting that military technical cooperation plays an important role in the bilateral ties, he said Russia is willing to meet Vietnam's demand for modern weapons to protect its security and national sovereignty. Cyber security, culture and humanitarian aid are also the fields where the two countries have maintained smooth collaboration.

Regarding the organization of the Vietnam Year in Russia and the Russia Year in Vietnam in 2019, Lavrov said Russia is establishing an organizing committee which is led by Deputy Prime Minister Maxim Akimov, the official unveiled, expecting that Vietnam will soon set up its similar committee.

Regarding Vietnam's hosting of the second summit between the US and the Democratic People's Republic of Korea (DPRK) on February 27 and 28, the diplomat said Russia supports US-DPRK relations and hoped that the summit would be a success.

Lavrov said Vietnam was selected as the venue of the summit as the country has pursued a responsible foreign policy and it has been loyal to friends and does not want to confront with any nation.

Russian Foreign Minister praises growing Vietnam-Russia ties have 445 words, post on en.vietnamplus.vn at February 24, 2019. This is cached page on VietNam Breaking News. If you want remove this page, please contact us.