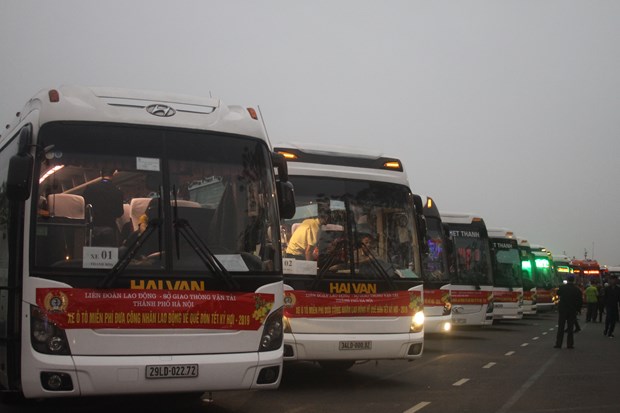 Coaches line up in early morning, ready to carry workers from Hanoi to their hometowns (Photo: congdoanhanoi.org.vn)

Hanoi (VNA) – Businesses, industrial zones and hospitals nationwide have been getting into the Tet ( Lunar New Year ) spirit and providing free transport to allow workers and patients travel home to spend the holiday with their families.

Tran Van Nam, Secretary of the provincial Party Committee, said the province is  populated by more than 2.3 million people, and more than a half of them were workers coming from other provinces.

"Thus provincial leaders always try our best so that all workers have better physical and mental lives," said Nam.

Nguyen Thi My Thu, from the central province of Quang Binh, has worked in Binh Duong for eight years.

"When Tet holiday is coming, people living far from home like me want to go back home. Understanding our desire, the provincial labour federation supported us and also gave us meaningful presents," she said.

It is the 10th year the provincial labour sector has provided free coaches for workers for the Lunar New Year holidays. As many as 25,000 workers have benefited from the programme.

Also on January 31 morning, 20 free buses took more than 600 poor cancer patients from the K Hospital in Hanoi to their hometowns to enjoy the holiday.

The programme was organised by the K Hospital, in coordination with the Cancer Patient Support Fund, the Vietnam Young Doctors Association and other partners.

Pham Trung Tuyen, a patient, said that he used to be the bread winner in his family, but contracted stomach cancer. His family has struggled to make ends meet during his two years of treatment.

"The free bus and presents from hospital leaders make all of us happy," he said.

Other hospitals including the National Burn Hospital, the National Paediatrics Hospital and Bach Mai Hospital have helped patients return home.

Earlier on January 30, the HCM City Labour Federation worked with trade unions of the municipal industrial zones to arrange 36 coaches to take more than 1,500 workers home.

Dang Thi Toan, went together with her small daughter from the Linh Trung 1 Export Processing Zone where she works to her home in the northern province of Thai Binh.

"I could not sleep during the previous night because I wanted to come home. The feeling is difficult to express," said Toan.

Dinh Thi Thanh Tam, from the central province of Thanh Hoa, said she hadn't been able to go home for four years.

"Thanks to the programme, I can go to my hometown. I'm really excited all the time," she said.

Tran Thi Dieu Thuy, chairwoman of the city labour federation, said municipal leaders hoped all workers could go home safely, happily and would come back to work on time after the holiday.

Huynh Van Tuan, Chairman of the HCM City Industrial Zone and Processing Zone Trade Union, said the city would organise a total of 96 buses to take more than 4,000 workers to their hometowns.

On February 1, the Hanoi Federation of Labour also hired 36 coaches to carry 1,600 disadvantaged workers to their homes in central Thanh Hoa, Nghe An and Ha Tinh provinces to welcome Tet.

Nguyen Thi Tuyen, chairwoman of the Hanoi Federation of Labour, said the free-of-charge coach programme has been organised for 11 consecutive years so far.

The programme has helped disadvantaged workers to save money and have a strong attachment to their companies, she added.

The same day, the Vietnam National Coal and Mineral Industries Holding Corporation Limited (Vinacomin) arranged more than 100 coaches to take 5,000 workers home for Tet. The corporation will also send coaches to bring the workers back to work at the end of the holiday.

Trade unions at different levels across the capital together spent more than 30 billion VND (1.28 million USD) on supporting workers on Tet. Of the sum, the municipal labour federation contributed some 7.46 billion VND (320,000 USD). As a result, about 2,000 coaches brought more than 80,000 workers home, and over 65,000 gifts were presented to the targeted workers.-VNA

Disadvantaged people assisted to return home for Tet have 876 words, post on en.vietnamplus.vn at February 1, 2019. This is cached page on VietNam Breaking News. If you want remove this page, please contact us.