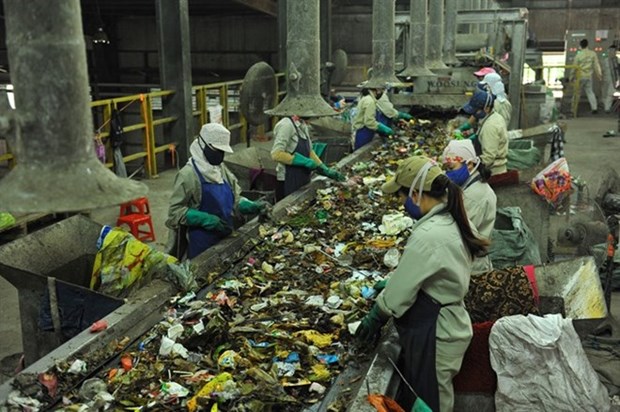 Hanoi (VNS/VNA) – In 2017, up to 38,000 tonnes of municipal waste was generated a day in Vietnam and a lack of proper solutions to the waste problem is harming the urban environment.

A group of specialists, including Le Hoang Anh, Mac Thi Minh Tra and Nguyen Thi Bich Loan, from the Northern Centre for Environmental Monitoring Portal under the Vietnam Environment Administration discovered municipal solid waste in the country increases 10 to 16 percent each year.

Up to 70 percent of municipal solid waste is household waste .

Plastic waste makes up 7 percent of solid waste, about 2,400 tonnes a day.

Up to 95 percent of plastic waste in Hanoi, however, is buried. The percentage in HCM City is 76 percent.

Although the percentage of collected waste has increased in recent years, it has still remained low due to the growing speed of waste generation, poor treatment capacity and low awareness of people, especially in rural areas.

From November 24 last year, HCM City authorities started enforcing regulations on garbage classifying, imposing a fine of up to 20 million VND (860 USD) for each violation.

Among 660 landfills in Vietnam, only 203 dumps meet sanitation requirements.

Nguyen Duc Quyen, lecture of the School of Heat Engineering and Refrigeration under the Hanoi University of Science and Technology, said waste treatment technology in Vietnam is developed mostly by individuals and private companies.

Therefore, he recommended encouraging scientists and experts in this field to improve the efficiency of garbage collecting, sorting and treatment in Vietnam.

HCM City and Hanoi spend about 1.5 trillion VND (64.5 million USD) a year on processing garbage, accounting for 3.5 percent of the cities' public budgets.

The cost for other provinces is estimated at 40 billion VND (1.72 million USD) a year.

The sanitary charge of 4,000 to 6,000 VND (17 – 25 cents), paid monthly to a local environment company, only covers 20 percent of waste collecting and transporting expenses.

The Ministry of Natural Resources and Environment also plans to impose service charges on municipal waste treatment by 2025, initially in large cities.-VNS/VNA

Solid waste treatment remains questionable have 596 words, post on en.vietnamplus.vn at January 3, 2019. This is cached page on VietNam Breaking News. If you want remove this page, please contact us.