When NATO Secretary-General Jens Stoltenberg commended Poland’s commitment to the alliance in Warsaw in early March, he struck a chord with Poles. “We are very grateful for the contribution Poland makes to NATO every day,” he said.

“Poland is a very committed ally, an ally which is contributing to our shared security, to our collective defense in many different ways,” Stoltenberg added. “And that’s something which we really welcome.”

The praise is justified: Poland has been trying for years to position itself as a model member of NATO. The country spends 2 percent of its gross domestic product on defense, participates in NATO foreign missions, such as in Afghanistan, and warmly welcomes the presence of NATO troops on its soil.

Read more : ‘Russia is the only conceivable threat to Poland’

At the same time, Stoltenberg has warned of the growing military threat posed by Russia, which hits a nerve in terms of Polish foreign policy. Out of fear of its eastern neighbor, the country has been strongly oriented towards the West since the fall of communism in 1989.

After the collapse of the Soviet Union in 1991, Poland’s accession to NATO became a strategic goal — one that was met with widespread support.

Russia against Poland’s accession to NATO

From the start, the Polish effort to join the alliance was a thorn in the side of Russia. Russian tanks remained stationed in Poland until 1993, despite the dissolution of the Warsaw Pact two years earlier. Long after the fall of the Iron Curtain, the country was viewed as being under the influence of the Kremlin. 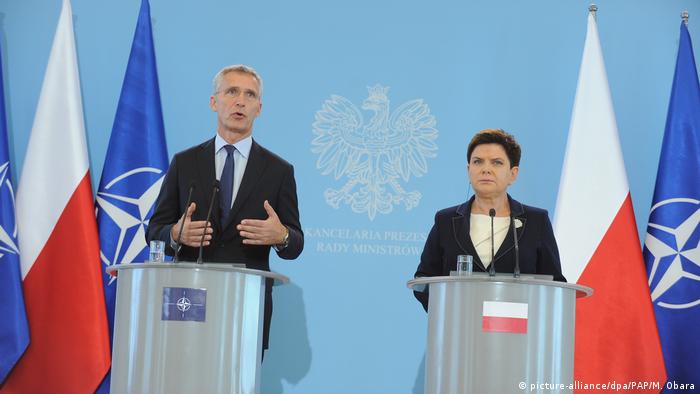 “The Russians were of course against our NATO membership, but we tried by all means to overcome the resistance,” said Janusz Onyszkiewicz, Poland’s defense minister at the time of the country’s NATO accession.

Onyszkiewicz views the visit of then-Russian President Boris Yeltsin to Warsaw in August 1993 as a breakthrough moment. Poland’s then-president, Lech Walesa, took the opportunity to inform Yeltsin of the plans to join NATO.

After an evening banquet with Walesa, Yeltsin published a final communique in which he announced Russia’s “understanding of Polish NATO plans.” The news was met with tremendous surprise, both in Brussels and in Moscow.

Although Yeltsin, under pressure from the Russian military, was forced to revoke his words in writing, Onyszkiewicz said that this initiative had shown that “Russia, despite voicing strong opposition, could no longer stop the process.”

A diplomatic offensive was then launched by Poland, Hungary and the Czech Republic. In 1994, then-United States President Bill Clinton said in Brussels that NATO enlargement was not a question of “if” but “when.” This was when Poland’s accession first appeared to be a real possibility.

The 1997 NATO-Russia Founding Act, which defined cooperation between Russia and NATO, was a de facto affirmation of the alliance’s forthcoming enlargement. 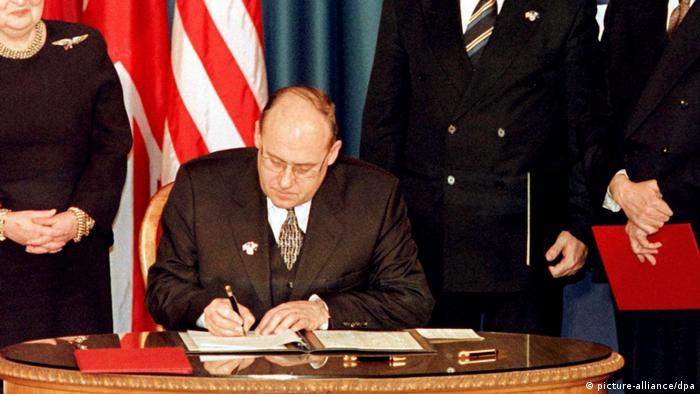 Poland, Hungary and the Czech Republic officially joined NATO in 1999

On March 12, 1999, in the presence of their US counterpart, then-Secretary of State Madeleine Albright, the foreign ministers of Poland, Hungary and the Czech Republic finally signed the protocols of NATO accession. The ceremony took place in Independence, Missouri, the hometown of Harry Truman, who was US president when NATO was formed.

“I stood with the entire Polish government at the Tomb of the Unknown Soldier in Warsaw. We waited for a signal from the US that the documents had been handed over to Secretary of State Albright,” recalled Onyszkiewicz. “That’s when the NATO flag was hoisted up the flagpole. I was very touched. I was aware that history was written at that moment.”

Onyszkiewicz was keen to convince fellow NATO members that with Poland they had gained an ally “for good, but also for difficult times.”

He stressed that Poland proved this in the following years, for example by the diligent restructuring its army and participating in several NATO foreign deployments. Some 350 Polish military personnel are currently involved in the Resolute Support Mission in Afghanistan , for example, and that number is soon set to increase to 400.

The US: A security guarantor

But in Warsaw, a special spot has long been saved for the US itself , which Poland regards as much more of a security guarantor than NATO. In 2003, Poland was one of the few European countries, along with the United Kingdom and Spain, to send soldiers to participate in the US-led war in Iraq. 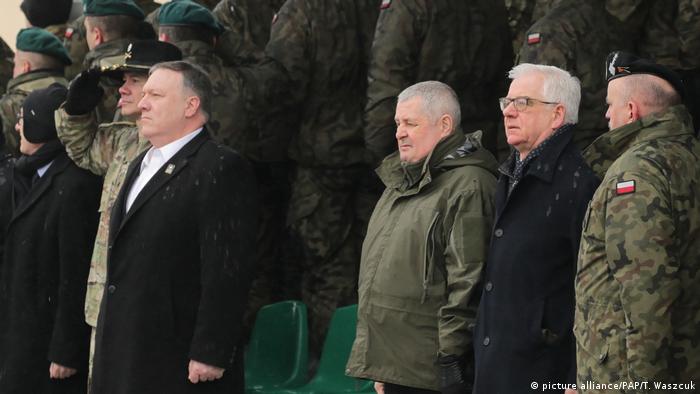 In January 2017, in the western town of Zagan, Poles welcomed the arrival of around 3,500 US soldiers. This was the first rotation contingent under NATO’s Atlantic Resolve, a stationing of alliance troops on a nine-month rotation. Three months later, US combat units received an especially warm welcome from residents of the northern Polish town of Orzysz, which is located near the border with the Russian exclave of Kaliningrad.

Following the 2016 NATO summit in Warsaw, alliance battalions were also deployed in three Baltic countries as a reaction to the Russian annexation of Crimea .

The Polish government is currently working to increase the presence of US troops in the country, including a permanent military base . Polish President Andrzej Duda has long been conducting a diplomatic offensive in Washington to get the project off the ground, calling it “Fort Trump” after the current US president.

In 2018, a document entitled “Proposal for a permanent US presence in Poland” was sent to US government officials, members of Congress and Washington think tanks. It states that Poland is seeking an entire US tank division to be brought over to the country and is prepared to spend up to $2 billion (€ 1.77 billion) to make it happen.

Support for US presence

Critics see this push as somewhat of a solo mission by the Poland’s current government, run by the national-conservative Law and Justice party (PiS), which openly expresses ideological sympathies with President Donald Trump. Onyszkiewicz supports the efforts to increase the US military presence in his country but believes the arrangements should happen within the NATO framework rather than bilaterally.

Onyszkiewicz said that in the event of an attack on his country, an enhanced US presence in Poland would guarantee that Washington would feel it has a responsibility to “implement the security guarantees of the NATO treaty.”

After 20 years in NATO, Poland still eager to please have 1144 words, post on www.dw.com at January 11, 2019. This is cached page on VietNam Breaking News. If you want remove this page, please contact us.