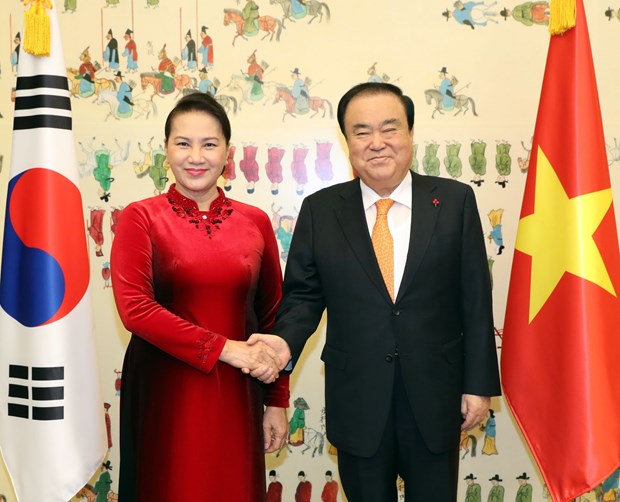 
Seoul (VNA) – The National Assembly of Vietnam is willing to work with its counterpart in the Republic of Korea to further enhance the sound friendship and sustainable cooperation between the two parliaments , NA Chairwoman Nguyen Thi Kim Ngan affirmed during talks with Speaker of the RoK National Assembly Moon Hee-sang in Seoul on December 6.

This will contribute to promoting the strategic cooperative partnership between the two countries and for the sake of their peoples, Ngan said.

She agreed with the RoK Speaker that the friendship and cooperation between the two countries have witnessed remarkable strides and become even closer since the establishment of diplomatic ties in 1992, especially in the fields of politics, economy, culture, and people-to-people exchange.

Bilateral relations have been developing comprehensively in all fields, Ngan said, adding that Vietnam and the RoK have become leading partners of each other in various realms.

The top legislator spoke highly of the state visit to Vietnam by RoK President Moon Jae-in in March 2018, which, she said, was an important highlight in the development of the bilateral rapport. 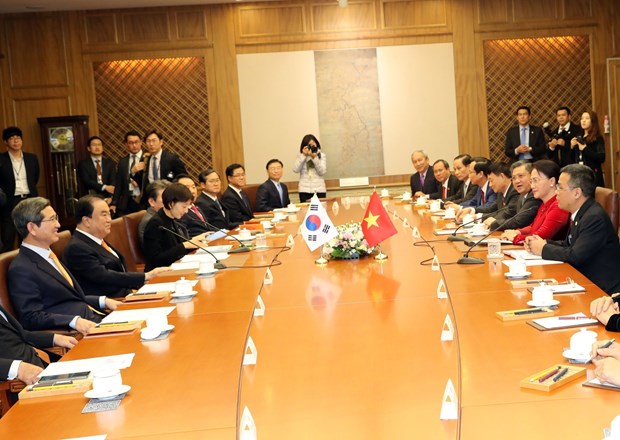 At the talks (Photo VNA)

The maintenance of high-level visits across all channels, from the State and National Assembly to the Government, has significant meaning in enhancing the multi-faceted cooperation between the two countries as well as promoting exchanges between ministries, localities, and peoples to increase their mutual understanding, she said.

She added that Vietnam attaches great importance to developing cooperative relations with the RoK and considers the country an important long-term partner.

The two countries share many historical and cultural similarities and hold common benefits in maintaining peace, stability, and cooperation for the development of each nation as well as the region and the world.

Vietnam is willing to work with the RoK towards elevating the bilateral strategic partnership and cooperation expansion in various fields, she noted.

For his part, Moon Hee-sang noted that Vietnam is the fourth biggest trade partner of the RoK. In 2017, two-way trade hit 63.9 billion USD, a year-on-year rise of 40 percent.

Meanwhile, the RoK is the largest investor in Vietnam with 75 billion USD invested to date, he said.

The Speaker said that President Moon Jae-in put forth the New Southern Policy after taking up office to enhance relations with the Association of Southeast Asian Nations (ASEAN), of which Vietnam is an important country partner in various fields such as trade, investment, official development assistance, and people-to-people exchange.

The President has always treasured relations with Vietnam, he said, adding that during his visit to Vietnam in March 2018, the two countries' leaders agreed to increase the bilateral trade to 100 billion USD by 2020.

Speaker Moon Hee-sang hoped the Vietnamese National Assembly and Government will pay more attention to Korean businesses operating in the country so they can contribute to realising the two-way trade target.

He stressed that Vietnam is the biggest development cooperation partner of the RoK and hoped the two sides will work together to building win-win cooperation.

He also mentioned the enhancement of people-to-people exchange and the protection of the two countries' citizens.

The RoK has provided many policies to support Vietnam-RoK multicultural families and ensure the legitimate rights and interests of foreign workers, including those from Vietnam.

She asked the RoK side to take specific measures to help Vietnam reduce its trade deficit with the RoK; increase its exports of farm produce, seafood, and processed foods; and join the RoK's global production and supply chains.

Vietnam will continue to create favorable conditions for RoK investors to join in the country's key projects, as well as the equitisation of state-owned enterprises and banking restructuring, while also encouraging the transfer of technology in renewable energy and working together to effectively implement the Vietnam-RoK Free Trade Agreement and the framework agreement between the two countries for credit from the Economic Development and Cooperation Fund (EDCF) for 2016-2020, she said.

She stressed that Vietnam highly values the RoK's official development assistance (ODA), hoping that the RoK will continue to expand the capital in the coming time in line with particular conditions and demands of Vietnam in priority fields like transport infrastructure and transportation technology, urban development, agriculture and rural development, high-quality human resources training, and especially the developed application of science-technology in the Fourth Industrial Revolution.

She took this opportunity to welcome the RoK Government's new visa policy for Vietnam, while proposing both sides coordinate to promote tourism cooperation, facilitate the granting of visas for Vietnamese citizens, and consider the exemption of tourism visa fees for Vietnamese tourists.

The RoK is one of Vietnam's key sources for tourism markets. There are around 1,000 direct flights between the two countries each month. The launch of a direct route between Seoul and Phu Quoc is expected to be announced at the Vietnam-RoK investment and trade forum as part of this visit, she said.

Chairwoman Ngan highly values the cooperation in security and defence between the two countries, saying that the collaboration will continue to develop in a substantial and effective manner following the signing of the Vietnam-RoK Joint Vision Statement on Defence Cooperation towards 2030 in April 2018, and the memorandum of understanding (MoU) on logistics support in the United Nations peacekeeping mission and natural disaster humanitarian support in June 2018 between the two defence ministries.

Regarding labour cooperation, the NA Chairwoman valued the RoK Government's agreement to sign a special memorandum of understanding on labour cooperation and the renewal of the standard MoU in March 2018 on the basis of respecting relations with Vietnam.

She suggested the two sides continue to effectively realise the MoU on dispatching and receiving Vietnamese workers and expand those eligible to work in different areas in the RoK under the Employment Permit System (EPS), as well as consider increasing the quota for Vietnam.

At the talks, the leaders expressed their delight at the bustling people-to-people exchange. The Vietnamese community in the RoK numbers nearly 197,000, including over 48,000 workers and 42,000 students. Meanwhile, around 150,000 Koreans are currently living in Vietnam.

The two countries also boast very close-knit ties with around 68,000 citizens having Vietnam-ROK transnational marriages. Up to 60 cities and provinces of Vietnam and the RoK have signed and effectively implemented their cooperation agreements.

NA Chairwoman Ngan expressed her belief that with such large communities, the two sides will create favourable environments for overseas residents to live and work in each country. She affirmed that the Vietnamese NA always supports the two governments in accelerating negotiations for the signing of an agreement on judicial assistance in civil and commercial matters in order to ensure the legitimate interests of the two countries' peoples.

She wished that the RoK National Assembly and Speaker Moon Hee-sang will raise their voices in support of the Vietnamese community in the RoK, especially workers and women married to Koreans, towards leading a stable life with full legal status to integrate into the host country's society.

She also hoped for the expansion of Korean and Vietnamese language teaching in both countries, especially teaching Vietnamese for second generations of Vietnamese-Korean multicultural families.

On the occasion, the Vietnamese leader expressed her thanks to Korean coach Park Hang-seo, who has led the Vietnam U23 football team to obtain unprecedented victories in major international tournaments.

Vietnam is ready to act as a bridge to promote multifaceted cooperation between the RoK and ASEAN member states, she said, adding that it also appreciates and supports the RoK's efforts to ease tension, as well as boost dialogue and collaboration in such issues as the denuclearisation of the Korean Peninsula and inter-Korea relations.

Vietnam hopes that the efforts of the RoK and concerned parties will record practical progress, thereby helping protect the environment of peace, stability, cooperation, and development in the region and the world, she noted.

Vietnam appreciates the RoK's stance on the East Sea issue, she said, asking the RoK to continue supporting the position of Vietnam and ASEAN in maintaining peace and stability, and addressing disputes in the East Sea by peaceful measures in line with international law, with the full implementation of the Declaration on the Conduct of Parties in the East Sea (DOC) towards the conclusion of a Code of Conduct in the East Sea (COC).

Regarding the relations between the two parliaments, Ngan said that the Vietnamese legislature always wishes and stays ready to closely cooperate with its RoK counterpart to support and foster the strategic cooperative partnership between the two nations.

She agreed with Moon on the maintenance of the regular exchange of all-level delegations to share experience in legislative activities and coordinate in supervising the realisation of cooperation agreements signed between the two governments.

The legislative bodies should listen to business communities and citizens in order to create a favourable legal environment for cooperation, exchange, and citizen protection activities.

They will continue promoting the role of their friendship parliamentarians' groups to form bridges, boost delegation exchanges and information sharing, as well as seek new effective forms of collaboration.

The two sides will increase coordination and mutual support at inter-parliamentary forums, thus contributing to maintaining an environment of peace, stability, cooperation, and development in the region and the world.

Vietnam’s National Assembly keen to develop relations with RoK: top legislator have 1778 words, post on en.vietnamplus.vn at December 6, 2018. This is cached page on VietNam Breaking News. If you want remove this page, please contact us.