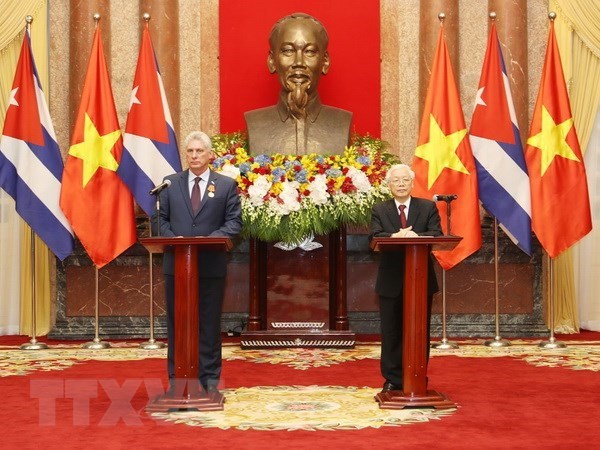 General Secretary of the Communist Party of Vietnam and President Nguyen Phu Trong (right) and President of the Council of State and Council of Ministers of Cuba Miguel Mario Diaz Canel Bermudez at the press conference. (Photo: VNA)

Hanoi (VNA) – General Secretary of the Communist Party of Vietnam and President Nguyen Phu Trong and President of the Council of State and Council of Ministers of Cuba Miguel Mario Diaz Canel Bermudez reached consensus on measures to improve the efficiency and sustainability of cooperation between the two countries during their talks in Hanoi on November 11.

The Vietnamese leader said at a joint press conference following their talks that the bilateral political ties are developing fruitfully with high mutual trust, as seen through the regular exchange of delegations at all levels through all channels of the Party, State, Government and National Assembly, as well as people-to-people exchange.

Cooperation mechanisms between the two countries' governments, ministries and sectors have been maintained and proven their efficiency with diverse activities, he said.

Host and guest compared notes on measures to deepen economic, trade and investment ties in an effective and practical manner, intensify the partnership in national defence-security and external affairs, and step up affiliation in agriculture, bio-technology, pharmaceutical products, health care, science-technology and exchange between citizens.

Regarding regional and international issues of shared concern, both sides expressed their support for the settlement of sovereignty disputes by peaceful measures on the basis of respect for international law.

Vietnam and Cuba affirmed that they will bolster collaboration at multilateral organisations and forums, especially the United Nations, the Non-Aligned Movement and the Forum for East Asia-Latin America Cooperation.

Party General Secretary and President Trong said he firmly believes that the good results of President Miguel Marino Diaz Canel's visit will create a new momentum to lift the Vietnam-Cuba special relationship to a new high, meeting the aspiration and interests of people of both sides, and contributing to maintaining peace, stability, cooperation and development in the region and the world as well.

Meanwhile, President Miguel Marino Diaz Canel expressed his hope that the two sides will continue to exchange experience in socialism building, and that the reached agreements will be materialised through specific cooperation projects, thus bringing practical benefits to both sides.

He affirmed that current and future generations of the two countries will always be loyal to the thoughts of Presidents Ho Chi Minh and Fidel Castro, and promote the friendship between the two nations.

Lauding the close cooperation between the two countries at international and multilateral forums, the President thanked Vietnam for its support to Cuba in the struggle for ending the embargo against the country.

The Cuban President affirmed that the Vietnam-Cuba relationship is a special one, both at present and in the future, citing President Fidel Castro's immortal statement: "For Vietnam, Cuba is willing to shed its blood."

Following their talks, the leaders witnessed the signing of a number of cooperation documents between the two countries, including a trade agreement and a financial protocol on implementing the cooperation project on rice production during the 2019-2023 period.

Earlier the same day, Party General Secretary and President Trong presented the Ho Chi Minh Order – a noble award of the Vietnamese Party and State – to President Miguel Marino Diaz Canel in recognition of his outstanding contributions to the solidarity, friendship and comprehensive cooperation between Vietnam and Cuba. -VNA

Vietnam, Cuba resolved to work for sustainable cooperation have 673 words, post on en.vietnamplus.vn at November 9, 2018. This is cached page on VietNam Breaking News. If you want remove this page, please contact us.