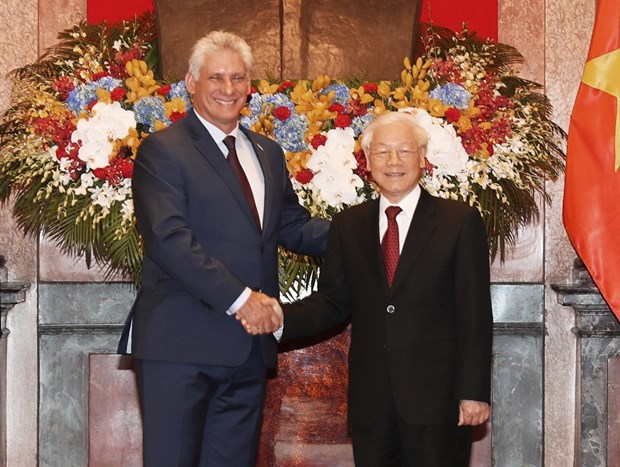 Hanoi (VNA) – General Secretary of the Communist Party of Vietnam and President Nguyen Phu Trong held talks on November 9 with President of the Council of State and Council of Ministers of Cuba Miguel Mario Diaz-Canel Bermudez following a welcome ceremony held for the Cuban leader.

During the talks, the leaders briefed each other on the situation in their respective countries and discussed orientations and measures to deepen the special relationship between the two sides in an effective and pragmatic fashion.

They also exchanged viewpoints on regional and international issues of shared concern.

Congratulating the Cuban people on achievements they have recorded recently, the host noted his belief that Cubans, under the leadership of First Secretary of the Communist Party of Cuba Raul Castro, will gain even greater attainments in the time ahead.

He thanked the Cuban Government and people for their solidarity and valuable support for Vietnam.

Vietnam wishes to deepen bilateral ties, meeting the aspirations and interests of people of both countries, while actively contributing to peace, stability, cooperation, and development in the region and the world, he said.

For his part, President Miguel Mario Diaz-Canel Bermudez applauded the reform achievements that the Vietnamese people have reaped over the past nearly three decades, saying that Cuba would also like to learn from Vietnam's development experience.

He also used this occasion to thank the Vietnamese State and people for their solidarity and valuable support for their Cuban counterparts, and affirmed Cuba's resolve to enhance the bilateral ties in order to effectively contribute to development in each country.

The two leaders applauded the growth of their countries' comprehensive cooperation, including increasingly trustworthy political ties through regular delegation exchanges and experience sharing.

Cooperation mechanisms between the Vietnamese and Cuban Governments, ministries, and sectors have been maintained and become more and more effective. Relations between the two parties, parliaments, and peoples have also been enhanced, they noted.

The two sides pledged to keep close and all-round cooperation during their journeys of national construction and development. They will make efforts to intensify their exemplary fraternity, traditional friendship, comprehensive cooperation, and faithful solidarity.

They applauded and emphasised the importance of the two Governments' signing of a new trade agreement and a protocol on capital disbursement and financial management of the Vietnam-Cuba project on cooperation in rice production development for 2019-2023.

Party General Secretary and President Trong shared the Cuban President's view that the current bilateral trade total at 240 million USD each year does not reflect the two countries' trade potential, demand, and supply capacity. They agreed to give relevant direction to actively promote the implementation of the bilateral trade cooperation agreement, seek ways to facilitate businesses' access to each other's markets, and strive to raise trade to 500 million USD by 2022.

The leaders also expressed their delight at their countries' growing coordination and mutual support at international organisations and multilateral forums, especially the United Nations, the Non-Aligned Movement, and the Forum for East Asia-Latin America Cooperation.

Regarding international and regional situations of shared concern, both sides shared the view that sovereignty and territorial disputes need to be resolved by peaceful means with respect for international law.

The Cuban President invited General Secretary and President Trong to pay an official visit to his country in the near future.

Before the talks, on behalf of the Vietnamese State, Party General Secretary and President Trong bestowed the Ho Chi Minh Order upon the Cuban leader in recognition of the latter's contributions to bilateral friendship and cooperation.

The same day, Minister of Industry and Trade Tran Tuan Anh and Minister of Finance Dinh Tien Dung, representing the Vietnamese Government, and Vice President of the Cuban Council of Ministers Ricardo Cabrisas Ruiz, on behalf of the Cuban Government, signed the new trade agreement and the protocol on capital disbursement and financial management of the cooperation in rice production development for 2019-2023. –VNA

Leaders agree to raise Vietnam-Cuba trade to 500 million USD by 2022 have 861 words, post on en.vietnamplus.vn at November 9, 2018. This is cached page on VietNam Breaking News. If you want remove this page, please contact us.