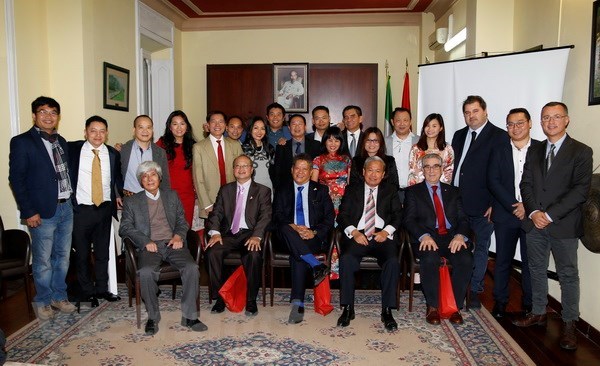 Participants in the second congress of the Association of Vietnamese Entrepreneurs in Italy pose for a photo (Photo: VNA)

Rome (VNA) – The Association of Vietnamese Entrepreneurs in Italy (ASSOEVI) held the second congress for the 2018-2021 tenure in Rome on November 23.

The congress reviewed the ASSOEVI 's performance over the past years and set up tasks for the new tenure with a view to developing the association, supporting its members' business activities in Italy, and contributing to economic, trade and investment ties between the two countries.

Pham Van Hong, ASSOEVI Chairman in the 2011-2018 tenure, said founded in 2011, the association has continually expanded and attracted new members, including Italians. It has increased exchanges to boost connections with Italian organisations and businesses, as well as Vietnamese entrepreneurs' associations in other European nations, he said.

Additionally, the ASSOEVI has provided Vietnamese and Italian firms with market information to help with their business and investment cooperation, he noted.

Addressing the event, Vietnamese Ambassador to Italy Cao Chinh Thien said the ASSOEVI is a key organisation of Vietnamese people in the country. He applauded its contributions to the development of the Vietnamese community in Italy and the two countries' economic and trade partnerships.

Thien expressed his hope that the ASSOEVI will keep enhancing its role and solidarity while organising many practical activities for the sake of the homeland.

The congress elected a nine-member executive committee of the ASSOEVI for the 2018-2021 term.

Vietnam and Italy set up the strategic partnership in 2013. Italy is now the fourth biggest European economic partner of Vietnam. Bilateral trade approximated 5 billion USD in 2017. With total capital of 389 million USD, Italy ranks 31st among 126 countries and territories directly investing in Vietnam.-VNA

Association outlines tasks to foster Vietnam-Italy economic links have 373 words, post on en.vietnamplus.vn at November 25, 2018. This is cached page on VietNam Breaking News. If you want remove this page, please contact us.