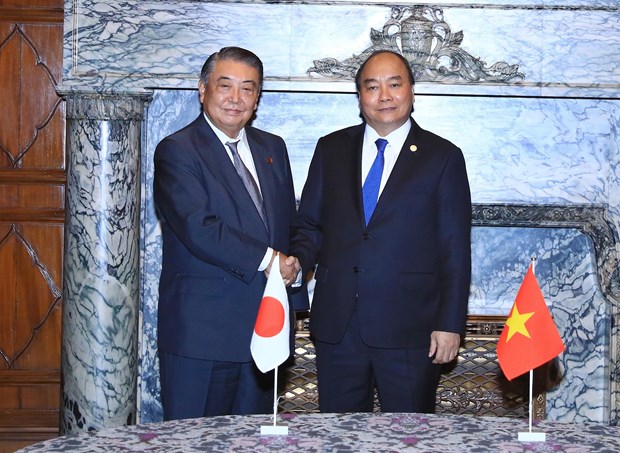 Tokyo (VNA) – Prime Minister Nguyen Xuan Phuc met with Speakers of the House of Representatives and the House of Councillors of the Japanese National Diet in Tokyo on October 10, as part of his visit to the Northeast Asian nation.

At the meeting, PM Phuc lauded the strong, comprehensive, and substantive development of Vietnam-Japan relations as well as the progress in parliamentary links since their diplomatic ties were set up 45 years ago.

He highlighted the wish to enhance connections in a more comprehensive and profound manner to match the interests and aspirations of the two countries' people. He also called for stronger coordination in regional and international issues of shared concern, thus actively contributing to peace, stability, cooperation, and development in the region.

Talking to Speaker of the House of Representatives Tadamori Oshima, the visiting leader asked the lower house to increase meetings at all levels and the exchange of legislative experience between the two parliaments. He also asked the house to bolster cooperation in agriculture, labour (including the reception of more Vietnamese practitioners), locality-to-locality ties, culture, and people-to-people exchange.

Oshima highly valued the breakthrough and substantive strides in Vietnam-Japan ties, noting that the Japanese lower house treasures its bilateral relations and wants to step up the countries' extensive strategic partnership in all spheres.

Meeting with Speaker of the House of Councillors Chuichi Date, PM Phuc appreciated the upper house's contributions to mutual cooperation in all fields.

He affirmed that Vietnam treasures and makes full use of Japan's official development assistance (ODA) in an effective manner, asking the Japanese parliament to consider providing ODA with more preferential conditions for the country.

The PM also called for the upper house's enhancement of bilateral ties between localities, as well as in agriculture and labour. He expressed his hope that the Vietnamese and Japanese parliaments will further supervise and promote the two governments' implementation of the signed agreements, and reinforce coordination at regional and international interparliamentary forums.

For his part, Date spoke highly of the Vietnamese Government's performance and the country's economic and diplomatic achievements. He affirmed that the upper house will strengthen the countries' extensive and all-round cooperation and support the Japanese Government to continue assisting Vietnam with its socio-economic development.

On this occasion, he also applauded the fruitful contributions by Vietnamese Ambassador to Japan Nguyen Quoc Cuong, who has helped flourish bilateral relations.–VNA

PM Phuc meets with leaders of Japanese parliament have 588 words, post on en.vietnamplus.vn at October 10, 2018. This is cached page on VietNam Breaking News. If you want remove this page, please contact us.