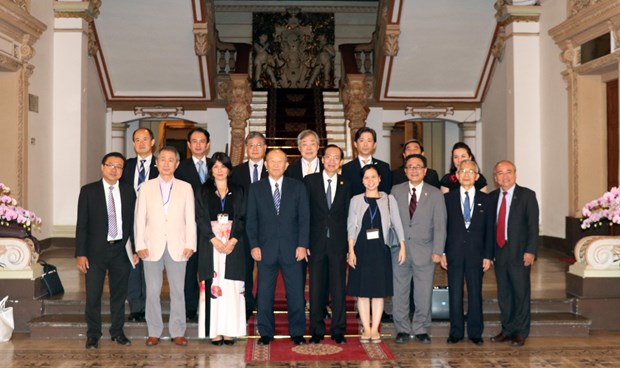 Officials of HCM City and representatives of the International Friendship Exchange Council of Japan pose for a photo (Photo: VNA)

Liem affirmed that Japan is a close friend of Vietnam and HCM City in particular, adding that the city has increased the exchange of visits as well as cooperation and friendship activities with Japan and its cities and prefectures.

The two sides have also organised a range of cultural exchange activities such as the Japan-Vietnam Festival and the Vietnam Festival in Aichi with the theme of "Ho Chi Minh City's Integration and Development," he said.

At the meeting, Liem and Nakagaki also discussed a number of issues in which Japan is interested like settlement of pressure from growing population, traffic congestion, flooding and the city's education work.

Nakagaki, who is also Chairman of the Japan-Vietnam Cultural and Economic Exchange Committee, said this is the eighth time has had led a FEC delegation on a working visit to Vietnam, enabling him to witness the rapid, impressive changes of both Vietnam and HCM City.

He commended the city's remarkable contributions to Vietnam's strong economic growth in recent years. Japan highly evaluated potential for socio-economic development of Vietnam and HCM City in particular in the future, Nakagaki added.

Sharing HCM City's plan to build itself into a smart city, Nakagaki said Japanese businesses want to join hands with the city in dealing with challenges in the process of urban development, especially in water supply and drainage, transport infrastructure and energy, among others.

The FEC was established in May 1983 as a non-profit international exchange organisation that, on the private-sector level, promotes relationships of friendship and cooperation between Japan and other countries as well as fosters public understanding of international circumstances.

Members of the FEC include many people with deep knowledge and experience in diplomacy and international relations, both from the public and private sectors, including ambassadors to Japan. The FEC is committed to developing and promoting relationships of mutual benefit with people of other countries from the perspective of independent, private diplomacy, by uniting the wisdom of members and reflecting people's wishes in diplomacy.-VNA

HCM City promotes people-to-people diplomacy with Japan have 569 words, post on en.vietnamplus.vn at October 12, 2018. This is cached page on VietNam Breaking News. If you want remove this page, please contact us.