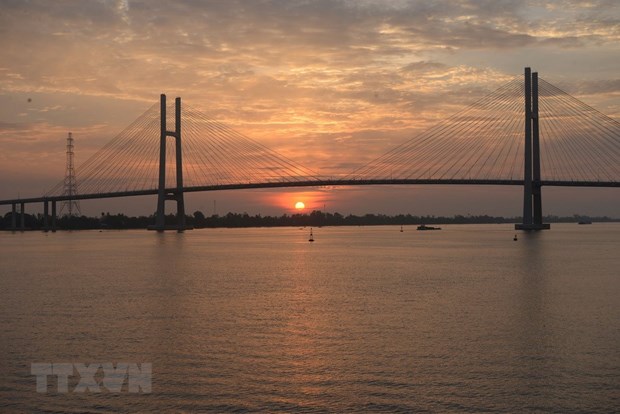 Cao Lanh Bridge, spanning the Tien River in the Mekong Delta province of Dong Thap, was opened on May 27 (Photo: VNA)

Hanoi (VNA) – The Ministry of Transport (MoT) put into operation 13 works and projects in the first nine months of this year, including major ones such as Cao Lanh Bridge and Da Nang-Quang Ngai Expressway .

The information was revealed at a conference in Hanoi on September 28 to review the ministry's nine-month performance and launch tasks for the last quarter of 2018.

The ministry also completed preparations to kick off 15 other works and projects, said Nguyen Tri Duc, Chief of the MoT Office.

In addition, it will remove difficulties for and speed up the electronic toll collection project, he added.

According to the official, the MoT will continue strengthening the management of project quality and accelerating the progress of projects while striving to complete 19 other projects such as Ba Vi-Viet Tri Bridge, Hoa Lac-Hoa Binh Road, the upgrading of National Road 6's Xuan Mai-Hoa Binh section, the second phase of Phap Van-Cau Gie Expressway, and Cat Linh-Ha Dong Elevated Railway.

The ministry will speed up disbursement for projects, ensuring the fulfillment of the 2018 disbursement plan. It will urgently complete procedures to soon implement projects using 15 trillion VND (643.7 million USD) from the 2016-2020 mid-term standby capital sources.-VNA

More than 10 transport works put into use in nine months have 373 words, post on en.vietnamplus.vn at September 28, 2018. This is cached page on VietNam Breaking News. If you want remove this page, please contact us.