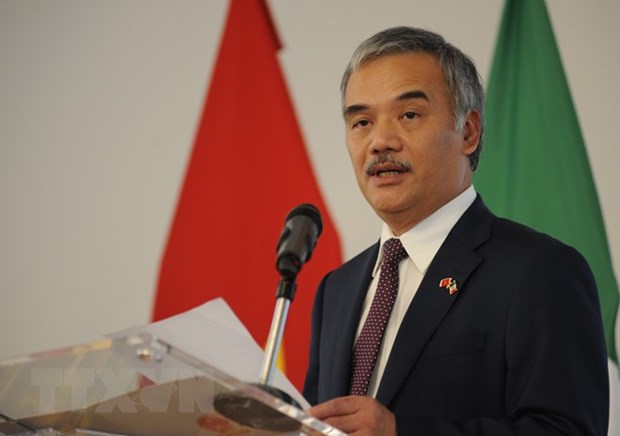 Mexico City (VNA) – The 73rd National Day of Vietnam continued to be celebrated with ceremonies held by the Vietnamese embassies in Mexico and Argentina on September 6.

The event in Mexico City saw the presence of more than 300 guests, including local officials, representatives of diplomatic corps and Vietnamese people in the American nation.

In his speech, Ambassador Nguyen Hoai Duong reviewed the milestones of Vietnam over the past 73 years since President Ho Chi Minh read the Declaration of Independence at Ba Dinh Square in Hanoi, establishing the Democratic Republic of Vietnam, now the Socialist Republic of Vietnam, on September 2, 1945.

Over the last seven decades, the country has weathered numerous challenges in the two resistance wars for national independence and unification and obtained considerable achievements in socio-economic development, turning Vietnam from a low-income country into one of the most dynamic economies in the world.

Vietnam has also been an active and responsible member of the international community. Its role and position in the region and the world have continually been improved, he noted.

The diplomat said since their diplomatic ties were set up on May 19, 1975, the cooperation and friendship between Vietnam and Mexico have been increasingly reinforced in all spheres.

He expressed his belief that once coming into force, the Comprehensive and Progressive Agreement for Trans-Pacific Partnership (CPTPP) will help create a favourable environment for enhancing the two countries' economic, trade and investment partnerships.

On behalf of the participants, the Director General for Asia-Pacific at the Mexican Ministry of Foreign Affairs, Alfonso de Maria y Campos, voiced his belief that the sound friendship and cooperation between Vietnam and Mexico will develop more strongly for the sake of the two nations and for peace, stability, cooperation and development in their respective regions and the world.

He also said bilateral economic and trade links will be lifted to a new height via the CPTPP.

Meanwhile, the celebration hosted by the Vietnamese Embassy in Buenos Aires was attended by Argentinian Deputy Foreign Minister Daniel Raimondi, many local officials, and representatives of socio-political organisations, diplomatic corps and the Vietnamese community in the country. –VNA

Celebrations of Vietnam’s National Day in Mexico, Argentina have 493 words, post on en.vietnamplus.vn at September 7, 2018. This is cached page on VietNam Breaking News. If you want remove this page, please contact us.