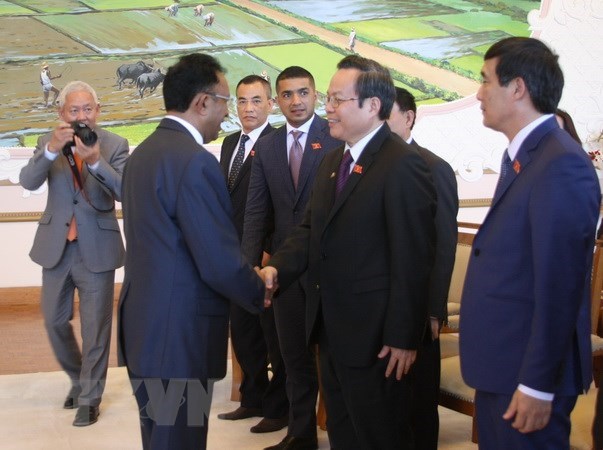 
Antananarivo (VNA) – The visit to Madagascar by a high-ranking delegation from the Vietnamese National Assembly will contribute to tightening the bilateral relations and open up new cooperation opportunities between the two countries, especially in the field of economy.

President of Madagascar Hery Rajaonarimampianina made the statement at a meeting with National Assembly Vice Chairman Phung Quoc Hien in Antananarivo on March 26.

He underlined the special traditional relations between Vietnam and Madagascar through historical periods.

The two countries have strengths and great cooperation potentials in agricultural production, he said, adding that Madagascar boasts vast cultivation land and abundant labour forces while Vietnam has experience and high agricultural technology.

The President called on Vietnamese enterprises to invest in Madagascar and said the Economic Development Board of Madagascar (EDBM) will be responsible for promoting investment between the two countries.

For his part, Hien thanked Madagascar people for their valuable assistance for Vietnam in the cause of national liberation, building and development.

Vietnam always treasures its ties with Madagascar via promoting high-level delegation exchanges, he said, adding that this is the first time a high-ranking delegation from the National Assembly has visited Madagascar, which will mark a new milestone in the bilateral traditional relations.

He also informed the outcomes of his earlier meetings with senior officials from Madagascar, including the top legislator, the minister of trade and consumption and the foreign minister.

The two sides affirmed the sound political relations between Vietnam and Madagascar and mutual support at multilateral forums. They also reached consensus on a number of issues, including cooperation potentials in various fields, particularly agriculture, seafood, telecommunication and education.

Regarding trade, Hien suggested the two sides exchange commodities of their strengths. For example, Vietnam will export rice to Madagascar while importing cashew nuts and vanilla from the market.

With strength in information-technology and telecommunication, notably the military-run group Viettel which is investing in many countries around the world, including African nations, there is a plenty of room for Vietnam and Madagascar to cooperate in this field, he said.

He also proposed a number of measures to promote investment partnership such as signing agreements on double tax avoidance, inter-bank payment, and investment encouragement and protection.

The same day, NA Vice Chairman Hien met with Madagascan Prime Minister Olivier Mahafaly Solonandrasana, in which he informed the host of Vietnam's socio-economic development in the past time as well as cooperation potential for the two countries in various sectors, including the collaboration between the two law-making bodies.

The Madagascan government leader said that the bilateral cooperation must be concretised by the implementation of specific plans like the signing of a free trade agreement between the two nations.

Earlier, the Vietnamese official had a meeting with Speaker of the Parliament of Madagascar Jean Max Rakotomamonjy on March 23. Both sides reached consensus on bolstering parliamentary ties and considering the establishment of the friendship parliamentarian group.

During their stay in Madagascar from March 23-27, Hien and the Vietnamese high-ranking delegation met with the President of the Senate, the Deputy Speaker of the Parliament, the Minister of Commerce and Consumption, the Minister of Foreign Affairs and the Minister at the Presidency in charge of Agriculture and Livestock.

The delegation paid a floral tribute to late President Ho Chi Minh at his statue in Antananarivo and visited the Vietnamese community in the country.-VNA

Vietnam, Madagascar beef up cooperation have 635 words, post on en.vietnamplus.vn at March 27, 2018. This is cached page on VietNam Breaking News. If you want remove this page, please contact us.