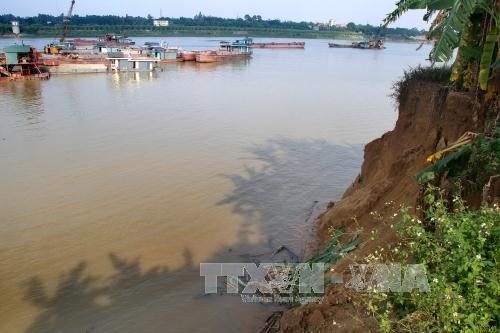 
Tuyen Quang (VNS/VNA) – Authorities
in several northern provinces have remained silent as hundreds of thousands of
households living along Lo river desperately seek help to prevent their farms
being swept away by rampant sand mining.

The households in the northern provinces of Tuyen
Quang, Phu Tho and Vinh Phuc said that hundreds of sand mining boats operating
along the two river banks are responsible for the erosion that threatens their
land. They have reported the situation to local authorities, but to no avail.

Dozens of dredging boats have been found
operating on the river section that passes through Phu Tho province. Some of
these have moved close to the river bank to mine sand, threatening residents’
corn fields.

Ho Thi Thanh Kien, a resident of Phu Ninh district’s
Ha Giap commune, said she as well as other residents had to harvest the corn in
haste as they were afraid the land would disappear soon.

“The water has almost reached the fence of my
corn field,” she said.

In Son Duong district’s Dong Tho commune, around
ten hectares of farm land were lost to erosion soon after dredgers began
operating in the area.

Duong Thi Lien, a resident of Son Duong district’s
Lam Xuyen commune, said that as much as 700sq.m of her 1,000sq.m plus plot has
been swept away, and she is scared she will lose the rest too.

Duong Thi Phuong Nhung, Chairwoman of the Lam
Xuyen commune People’s Committee, said they have been reporting the
situation to provincial authorities, but have received no response.

Although the provincial People’s Committee
invested 19 billion VND (836,400 USD) last year to build a dyke system along the river in Song Lo district,
landslides have continued to occur.

Nguyen Thi Loan, a resident of the province’s Don
Nhan commune in Song Lo district, said that local residents have asked
authorities for help many times, but received no reply.

The situation has seen conflicts flare up
between the residents and sand miners.

After reporting the illegal sand mining produced
no result, locals have gathered to block and even burn some of the boats.

Nguyen Huu Minh of Xuan Van commune said that
local residents had asked the company’s representative to talk about the
serious landslides caused by its sand exploitation, but the company refused.

They had tried to drive the sand mining boats
away, but these vehicles soon returned.

In July, 2016, a sand dredger belonging to the
Thai An Company in Phu Tho province’s Vinh Phu commune was also burnt. Locals
claimed that the company’s boats were illegally mining sand outside the allowed
area at night, causing landslides that threatened their land.

Residents said that lax management by authorised
agencies, typified by mass granting of sand exploitation licences without any
regard for sustainability, is also responsible for the conflicts between them
and sand mining firms.

Along the 5km-long river bank in Vinh Phuc
province’s Don Nhan commune, up to six firms have been licensed to mine sand.

A representative of the provincial Department of
Natural Resources and Environment said that license granting procedures were
implemented according to plans approved by provincial authorities.

On the accusation of illegal sand mining near
the river’s banks, Tran Minh Duong, head of the provincial department’s
Minerals Division, said that the office has conducted regular inspections of
all six firms and found them operating in the designated area.

Duong said that their sand mining had not
impacted the dyke.

In Phu Tho province, waterway traffic police say
their inspections have found no violations.

Nguyen Xuan Toan, head of the provincial
Department of Natural Resources and Environment’s Minerals Division, said four
sand mining businesses have been licensed in the province. Since 2016, the
office has found no violations, he added.

But residents are not happy. They want
authorised agencies to publicise the names of businesses that have sand mining
licences, their mineral exploitation certificate, including the number of mines
and their areas, total area and the quantity and type of exploitation. This,
residents say, would allow them to monitor the businesses and report violations
more accurately to authorised agencies.-VNA

Sand mining erodes farm land in northern provinces have 872 words, post on en.vietnamplus.vn at October 12, 2017. This is cached page on VietNam Breaking News. If you want remove this page, please contact us.