For German Foreign Minister Sigmar Gabriel, the abduction of Vietnamese businessman Trinh Xuan Thanh from Berlin is reminiscent of the action “one sees in thriller films about the Cold War.”

The German government says Vietnamese operatives captured Thanh in July this year and speedily flew him to Vietnam, where he is facing charges of corruption and embezzlement – offenses that carry the death penalty.

Witnesses reported seeing armed men pushing Thanh and a female companion into a car outside the Sheraton hotel in Berlin’s Tiergarten district on July 23. Both then appeared several days later in Hanoi.

However, Hanoi says that the 51-year-old returned to Vietnam of his own volition to hand himself in to police.

Thanh had earlier applied for asylum in Germany.

Following the incident, two Vietnamese diplomats have so far been expelled from the EU country by the German government. And Berlin has accused Vietnam of violating national and international law.

Authorities in Germany have yet to conclude their investigations into the case. But the evidence that has come to light thus far is overwhelming. The abduction in the Tiergarten was witnessed by passers-by and immediately reported to the police. 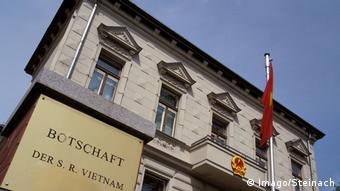 The vehicle used for this purpose was from the Czech Republic and equipped with a GPS device, allowing the journey from Tiergarten to the Vietnamese Embassy in Elsenstraße to be reconstructed.

On the German side, there is little doubt that Thanh was kidnapped. The Vietnamese side, though, has denied all allegations to date and claimed that Thanh voluntarily returned to his home country.

From the German point of view, Vietnam’s actions risk the good relationship existing between the two countries.

In Thanh’s case, domestic political calculations in Vietnam appear to carry more weight than having a good partnership with Germany. Thanh is regarded as a member of a political bloc that was sidelined after the last party congress of the Communist Party of Vietnam in January 2016.

The current tensions are all the more regrettable, as the German-Vietnamese relations have been a real success story for years.

Economically, Germany is now Vietnam’s most important EU trading partner, with bilateral commerce worth over €8 billion ($9.5 billion) in 2016. Both nations have forged close relationships in the areas of culture and science over the past two decades. The number of Vietnamese students in German universities has also been on the rise.

The growing interest among Vietnamese people for the German language and culture can be evidenced by the well-attended courses at the Goethe-Institut in Hanoi and its branch in Ho Chi Minh City.

Furthermore, Germany pledged over €160 million in development assistance for Vietnam in 2017. The money was intended for projects in vocational training, energy, and the environment, among other areas.

On the political front, Berlin and Hanoi have maintained a strategic partnership since 2011.

A central component of the cooperation is the German-Vietnamese rule of law dialogue, in which Germany advises Vietnam on legislative proposals and the further development of the legal system. It also includes training for Vietnamese judges and lawyers.

The strategic relationship between the two countries has been temporarily put on hold by Berlin since October, as Vietnam has so far not responded satisfactorily to Germany’s demands to apologize for the Thanh incident nor pledged not to repeat such acts and hold those responsible accountable.

It is, however, not clear how this suspension affects various bilateral development projects . Institutions responsible for the implementation of German development cooperation, such as the Deutsche Gesellschaft für Internationale Zusammenarbeit (GIZ) or the KfW Bank, do not give any information on individual projects.

When DW contacted these agencies, they referred to the German Federal Ministry for Economic Cooperation and Development (BMZ).

“The BMZ reacted immediately to the changed situation after the kidnapping case came to light. Development cooperation with Vietnam is currently restrained,” a spokeswoman for the BMZ told DW.

This means that ongoing projects will continue, but no new agreements will be signed. At the same time, a question mark hangs over follow-up financing for existing projects, including those related to the rule of law dialogue.

It’s also in the interest of Germany to see that these projects are completed, as they intend to promote the rule of law or cultural exchange. The respect for human rights is central to German development cooperation and violations of it could not simply be accepted, the BMZ pointed out as a reason for freezing development cooperation.

Major economic projects, such as the construction of a subway in Ho Chi Minh City by the German conglomerate Siemens, have so far not been affected by the Thanh incident.

Waiting for the Vietnamese

The German government has also suspended the visa-free entry into the country for all holders of Vietnamese diplomatic passports, an official in the foreign ministry told DW on condition of anonymity, adding that several high-ranking Vietnamese officials have been denied entry.

While the official noted that German-Vietnamese relations had been close and trustworthy before, they have been badly damaged since the kidnapping.

Germany has called on the Vietnamese government to ensure a fair trial for Thanh, overseen by international observers.

The German government and the German Embassy in Hanoi are closely monitoring the developments in the case and expect positive results, the official said, adding that the Vietnamese side knows what to do in order to fix the damage.

A request from DW for comments from the Embassy of Vietnam in Berlin has so far remained unanswered.

The trial of Thanh for misappropriation of wealth is due to start in January.

'Cold-War-style kidnapping' - Berlin waits in vain for signal from Hanoi have 1010 words, post on www.dw.com at January 21, 2017. This is cached page on VietNam Breaking News. If you want remove this page, please contact us.