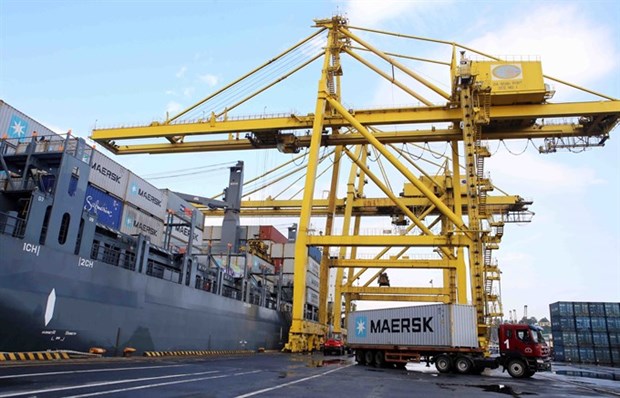 "The region has 20 deep sea ports, but the system only handles 55.5 million tonnes of cargo – 13 percent of the country's sea ports per year. Meanwhile, the central region's port system could host 300,000 TEUs (twenty-foot equivalent units), an equivalent of 2.8 percent of total domestic market share," Hiep said.

"The regional port system only plays a role as a collection centre for cargo being sent to major ports in northern and southern Vietnam. The region has only 422 businesses operating in logistics, with 8,000 labourers, and a revenue of 4 trillion VND (178 million USD)," he said.

Hiep also said production capacity in industrial zones (IZs) across the region has not yet developed in supplying enough cargo for logistics businesses.

He said most ports lack high capacity piers for giant ship docking, while ageing facilities and services at ports could not meet the demands of investors.

Hiep also complained that four airports, built at a distance of 200km or 300km from Da Nang to Quang Nam, Hue and Binh Dinh, only managed a small airfreight of 10.8 million passengers and around 1 million tonnes of cargo per year.

He said Da Nang International Airport alone could play its role as a regional destination for international air cargo and flights.

Chairman of the Da Nang city People's Committee, Huynh Duc Tho, said the city plans to invest in a national logistics centre in Hoa Vang district, on an area of 30ha and with investment of 370 million USD.

Tho said the centre will connect with the East-West Economic Corridor (EWEC) that links Vietnam, Laos, Thailand and Myanmar, the Da Nang-Quang Ngai Expressway as well as the north-south Vietnam national highway and railway system.

He said the centre will be situated between two key ports – Tien Sa and the anticipated new construction at Lien Chieu.

Director of the Vietnam Institute of Economics, Tran Dinh Thien said logistics in Vietnam is still new and the cost of logistics service is unusually high.

He said logistics counts for 25 percent of the total cost that businesses and investors have to pay.

"The region has yet to develop as a transit hub for cargo from Laos, Cambodia, Thailand and the Central Highland region and the Greater-sub Mekong," Thien said.

He suggested the region needs a 'maestro' in arranging roles and the function of each port and airport.

He said Chan May port in Thua Thien-Hue could play a role as a cruise port rather than cargo port, while ports in Quy Nhon, Dung Quat, Chu Lai and Da Nang are set for specific demands of cargo, oil tankers or regular shipping routes.

Director of Chu Lai Open Economic Zone Authority (EZA) Do Xuan Dien said exporters often pay an extra 30 USD or 50 USD to transport cargo by road from Quang Nam to HCM City's ports for export, while railway and expressways are yet to meet the demand of large cargo quantities.

Nguyen Xuan Thang, from Fulbright University Vietnam, said that a key logistics centre in Da Nang could be a good choice as it helps connect Chan May port and Economic Zone in Hue, as well as Da Nang-Quang Ngai Expressway in linking with Dung Quat and Chu Lai Economic zones in Quang Ngai and Quang Nam.

According to VLA, there are only 40 foreign shipping companies in Vietnam, accounting for only 5 percent of the country's total number of shipping firms, but they transport up to nearly 90 percent of Vietnamese import and exports, mostly to Europe, the US, the Middle East and Africa.

Central Vietnam lacks logistics have 813 words, post on en.vietnamplus.vn at November 15, 2016. This is cached page on VietNam Breaking News. If you want remove this page, please contact us.