E ntering Tinder's modest of fice building in Los Angeles, where signs on the first floor point to a Castaways Casting Office, it's not clear you're entering the headquarters of an app with a billion-dollar-plus valuation. But a few floors up, beyond a security guard – "We've had a ton of people come off the street and try to get jobs," says one Tinder VP – a cavernous industrial space spreads over a stunning view of L.A., with only one office with a closing door. That's for the CEO, Sean Rad, a slender 28-year-old with sorrowful brown eyes and an earnest manner, who today is in a gray shirt, slim jeans and white Converse high-tops.

Only two years old, Tinder has upended the way single people connect. It's the first matchmaking app to hook deeply into our culture: creating a flirt scene between athletes at the Olympics, importing randiness to Coachella (traffic on Tinder spikes during big festivals) and spawning knockoffs like a Jewish dating app (JSwipe) and the parody video "Kinder" for kids' play dates.

A kid could use Tinder. It's the simplest dating app there is: In most instances, a user merely sees a photo of a potential mate and either swipes left ("No thanks") or right ("I'm interested"). If both people swipe right, "It's a match!" and the users can message each other. Tinder also links you to individuals who share your Facebook friends, though not all the time.

Tinder, which makes about 13 million matches per day, is about 40 percent female. Women are still really picky – according to Rad, they swipe left 84 percent of the time, and men swipe left only 54 percent of the time. But the perception of having mutual Facebook friends seems to help women feel safe. And Tinder's minimalist interface seems at least as effective as a full-color résumé of men's accomplishments when it comes to making casual hookups happen.

Tinder has essentially exported Los Angeles-style dating across the globe. In L.A., where looks reign supreme, there's an endless smorgasbord of single people, and anything can happen on any night. The same goes for Tinder. It's a casting session and you're in the director's chair. "At the end of the day, it's just one big party, and you're just sitting there saying, 'Yes, no, yes, no,' " says Rad.

So you could call Rad the biggest yenta in the world, promoting free love across the globe – well, not free forever. In November, Tinder will release a premium version of the app. For a monthly subscription, users will have access to at least two new (and yet unspecified) features. The basic version of the app will remain free.

At Tinder's hive mind of singledom, a close-knit group of about 40 mild-mannered folks who hang out together on the weekends by choice is busily working away. It's clear some of the guys partake in the fruits of the app – one has an astonishing number of hickeys on his neck – though not Rad, who has a steady girlfriend, 20-year-old Alexa Dell (the daughter of the computer magnate). They met on Tinder. "I'm a serial monogamist," says Rad. "I saw Alexa, and I was like, 'Swipe right.' The rest is history."

At least three guys in the Tinder office have met their long-term girlfriends on the app. Jonathan Badeen, who designed the original app and is Tin der's "User Number One," says Tinder has radically changed his dating life. "In my twenties, I did not date much at all," he says. "Tinder made something that was always a huge ordeal for me much more comfortable." So what do girls say to Badeen after they find out he co-founded Tinder? "They always think I'm reading their messages," he says. (He doesn't.)

These aren't wild and crazy guys. Rad is a n L.A.-born Jewish-Persian-American whose parents emigrated from Iran in the 1970s and made a mint in the American consumer electronics business. He grew up as part of the close-knit Persian community in Beverly Hills. How close-knit? He has 42 first cousins. As a teenager, he started a band modeled on Coldplay, but "in my family, there was a need to make something of our lives," says Rad. "Not doing something big with your life was just not accepted." In high school, after interning for an entertainment manager and seeing how much control agents and managers exert over artists, he said, "Fuck it, I'm out of here." He stares with those soulful eyes. "I figured I could amass a lot of wealth by doing things I love – then I can control my own fate as an artist."

Rad had acne as a teenager, and his parents bought him his first phone at 13, to cheer him up. At 18, obsessed with mobile technology, he started his first tech company – Orgoo, a "unified communications platform" integrating e-mail, IMs and video chat (the name uses shorthand for "organization and an infinity sign," he says) – followed a couple of years later by a management company facilitating celebrity Twitter branding. Rad was enrolled in USC at the time, but like a lot of Beverly Hills kids, he found dorm life intolerable and moved back home after two weeks. 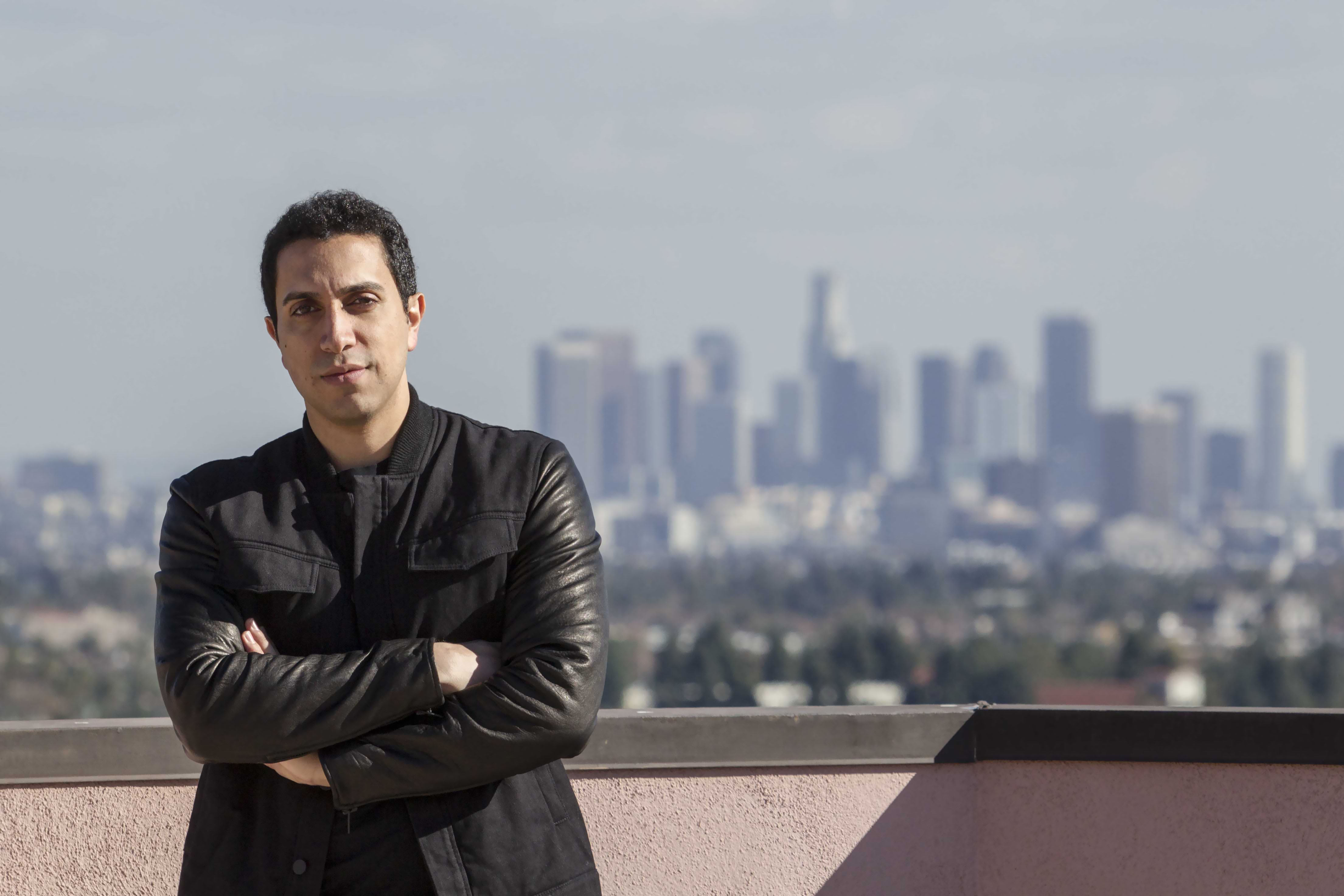 Rad signed up with Hatch Labs, a tech incubator funded primarily by IAC, the media and technology company founded by Barry Diller. This means many of the millions that will almost surely eventually pour out of Tinder are going to end up in Diller's pocket, since IAC owns a majority of Tinder's shares – though Rad also says that "many people have the potential of becoming billionaires if Tinder gets escape velocity." (He declined to define exactly what that means.)

Rad doesn't seem amused when asked if Grindr, an early sex-on-demand app for gays, was an influence – "Tinder" was merely a play on an early name for the app, "Matchbox." Rad imagined that a simplified dating app with a focus on images would be successful. He doesn't think this makes him superficial or vain. "A photograph has a lot of information in it, when you think about it," says Rad. "If I post a picture of myself on a ski slope, that says something different than a photo taken in Vegas at the pool at Encore." He continues, "The irony of Tinder is that in some ways the lack of information, or text, is actually less superficial than having the information."

The combination of Rad's L.A. dude-ish, binary-sorting mind – "Can't you see the way, at a restaurant, each person looks at the other going, 'Yes, no, yes, no,' " he says – and growing up as a sheltered rich kid was a perfect storm for creating a hit dating app. At first, Tinder targeted VIPs, like the presidents of sororities and other "key influencers in Greek life," plus celebutantes, models and other "high-quality people," as one employee puts it. The principle was that popular people would help Tinder be perceived as not just another dating app for losers: It was helping hot people who could already get dates get even better dates. "Let's say you're making $100,000 a year, but why not try to make $250,000 a year?" says an employee.

These were fun days, but like Facebook, Snapchat and pretty much every other big tech company out there, Tinder has an original employee who was essential back then and now feels cut out of history – but in Tinder's case, it's a woman. This past summer, Whitney Wolfe, Tinder's 24-year-old marketing VP and co-founder, sued the company for sexual harassment and sex discrimination. See, there was another Tinder founder once upon a time, in addition to Rad: Justin Mateen, Rad's best friend from childhood. "He's like my twin," says Rad today. "I mean, he's one month older than me, Persian Jewish, parents are friends, same community, we went to the same college, people say we look alike – it's funny."

Mateen was Wolfe's boyfriend. He was also Tinder's chief marketing officer, which essentially made him Wolfe's boss. All the problems that can happen in relationships happened with these two – hurt feelings, emotional unavailability, some sort of kerfuffle involving guys in Aspen. At work, each claimed they were the brain trust behind Tinder's VIP strategy for world domination. Wolfe alleges Mateen sent her a series of horrible texts, calling a friend of hers a "liberal lying, desperate slut" and saying, "If you threaten me, I will bark back like a psycho," and she also alleges that Rad made sexist comments. The company denies this.

The Wolfe case was settled this fall for an undisclosed amount, but at the office today, it's clear that there's discomfort and sadness about the way the scandal played out. "It hurt to see people you worked with so closely go through all that," says Badeen. Mateen is out – he resigned his position, though no one has explained why he's not coming back to Tinder. "I still talk to Justin," says Rad when asked about their relationship. "He's my best friend."

But that's all in the past. Tinder may be a little less exclusive than it was, but it still works better than the SAT-length multiple-choice tests of compatibility on older dating sites, few of which measure the probability of love in the real world. Rad won't say how many couples have met on Tinder, but the app can take credit for 2,000 engagements and weddings.

There's a lot more going on under the hood with Tinder than you'd imagine: Rad has a good algorithm, and, like Netflix, the more you use it, the more it understands you. It's possible he knows if you like brunettes or blondes, or how much you swipe right on men who look like John Mayer, or if you swipe left on pictures of women who look like Grimes. "We don't say exactly what we look at," says Rad, explaining that he's ingested an immense amount of information about Tinder users. "But maybe we look at information in the photos as well."

Gathering a few employees around him, Rad sits down to decide on the style of swag T-shirts they'll send to fraternities and sororities this fall, and talks about all the photos Tinder users take of themselves with tigers. "They're all tranquilized," says a marketing officer, who later adds, "For the record, we're not fans of that."

Rad laughs a little. "I want to meet someone crazy enough to hug a tiger," he says. "I would never hug a tiger, or pose with a tiger."​

Inside Tinder’s Hookup Factory have 2082 words, post on www.rollingstone.com at October 27, 2014. This is cached page on VietNam Breaking News. If you want remove this page, please contact us.