VietNamNet Bridge – A family in Ca Mau province in southern Vietnam, has received the Vietnamese record as the family with the most members who can float on water. 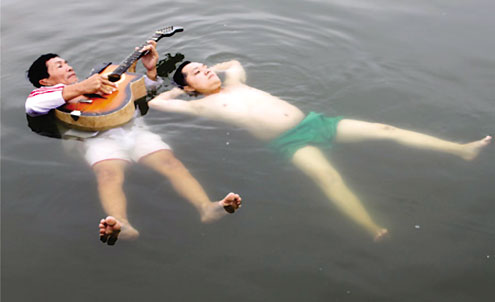 In early April 2010, Mr. Hua Van Bach from Tan Thoi B village in Ta An Khuong Dong commune, Dam Doi district was taking a bath in a local river when a boat passed. The boat created a big wave that pushed Bach to the middle of the river. Bach was very surprised to discover that he didn’t sink but floated on the surface of the water.

Many people went to Dam Doi district to witness the performance of these men.

Le Tran Truong An, general director of the Vietnam Record Book Center (Vietkings) said Vietkings expert verified the special skill of the three men and the center decided to present the Vietnamese record to this family.

The three floating men will participate in the 20th Meeting of Vietnamese Record Holders in HCM City on December 18.

At the meeting, Vietkings will announce 30 Vietnamese records, including the largest testament by President Ho Chi Minh written on palm leaves, the eldest musician who teaches traditional music through the Internet, the man who can play music by spoons, etc.

On this occasion, brothers Bui Ngoc Vinh and Bui Ngoc Khanh from Thua Thien-Hue province will perform their odd ability – each man will eat one kilo of chilli within ten minutes.

will be recognized as the person who had made the most paintings from palm leaves.

Tang began producing paintings by palm leaves in 1999. He opened a palm-leaf

with mother-of-pearl in Vietnam. It is owned by Mr. Tran Quang Khai in Phu Minh town,

the paintings inlaid on this bed featuring a hundred birds flanking a phoenix. 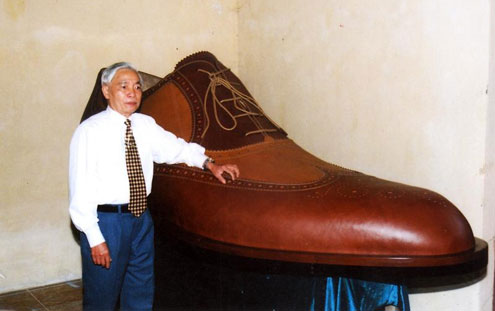 by the Lang Tre Charity Center in the southern province of Dong Nai.

The statue is made from thousands of pieces of bamboo. It is 1.94m high,

Thua Thien-Hue province is recognized as the one who restored the trade of making paper lotuses.

the HCM City University for Foreign Languages and Information Technology.

The student volunteers spent 16 days to make this painting from 35,000 stars.

is Dang Ai Viet, former lecturer of the HCM City Art University. She has portrayed

343 Heroic Mothers whose sons sacrificed their lives for the country in past wars.

is Mr. Nguyen Huu Thuan. Thuan has donated his blood for 65 times,

leaves is made by artisan Vo Van Tang from An Giang province. The work is

1.18m wide, 2.5m long. One side contains the text of President Ho’s testament

and the other side has five portraits of President Ho.

and the Federation of Korean Industries.

Family of floating people receives Vietnam record have 874 words, post on at December 18, 2010. This is cached page on VietNam Breaking News. If you want remove this page, please contact us.